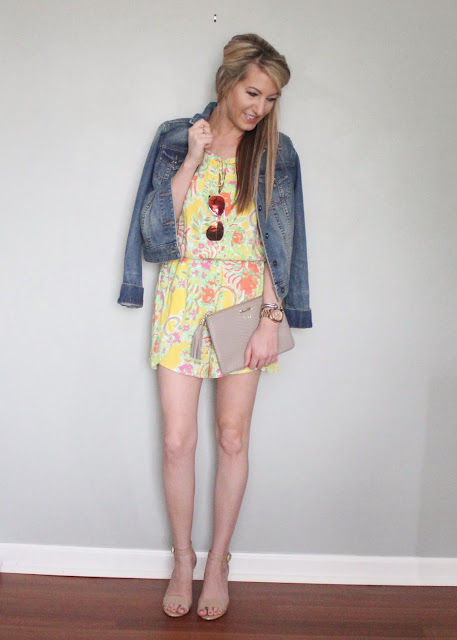 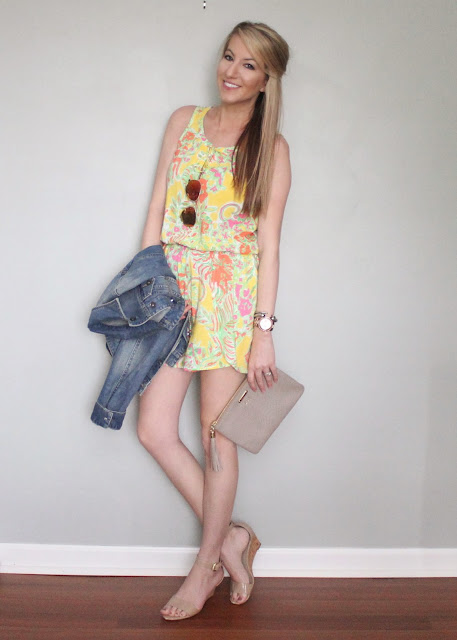 
Now that Sadie Ann is home, I typically only leave the house for doctor appointments and occasionally on the weekends. So I'm trying to take advantage of those outings and wear something other than a tee and jeans (and maybe sometimes sweat pants - ok, mostly sweatpants).  So here I am, wearing a complete outfit and sharing it! Go me!

Since I've already admitted my sweatpants problem, I'll go ahead and admit I was one of those women who went a little cray-cray for the Lilly for Target line. Honestly, I've been a fan of all theTarget collaborations, but most of them have been designers that aren't as well known as Lilly. So when I first heard about the collaboration, I thought two things: 1) Awesome! Affordable Lilly and 2) This is going to be bananas (Gwen Stefani bananas). And it was. I started following all the online hype and quickly realized if I wanted anything, I needed to stay up to order online and be at the store before it opens on Lilly Sunday. So I did and I was.

It paid off - I was able to get a lot of items I wanted. This romper was high on my list and I love it! Actually, I ordered it online and right before I placed my order, the site crashed. When the site was back up, almost everything was sold out already and I was certain I didn't get it - but I did! A few days later I received an email that my items had shipped - and I was thinking, What items?? The order went through and now it's mine! I can't wait to wear this comfy beauty on long car rides and at the beach. So perfect! Did any of you go cray for Lilly?

Lots of lightly worn and new items on my Shopping blog:
SHOP MY CLOSET 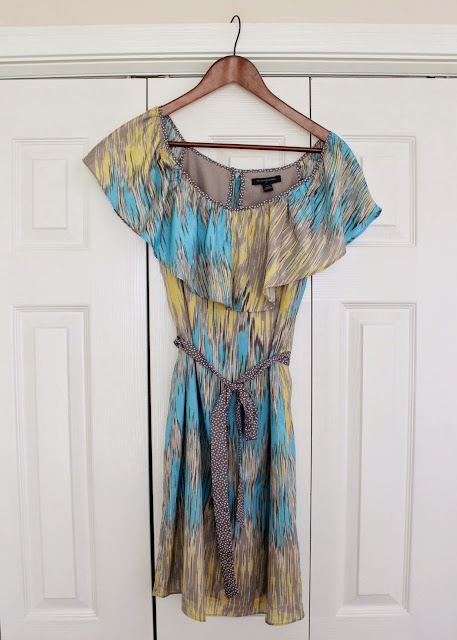 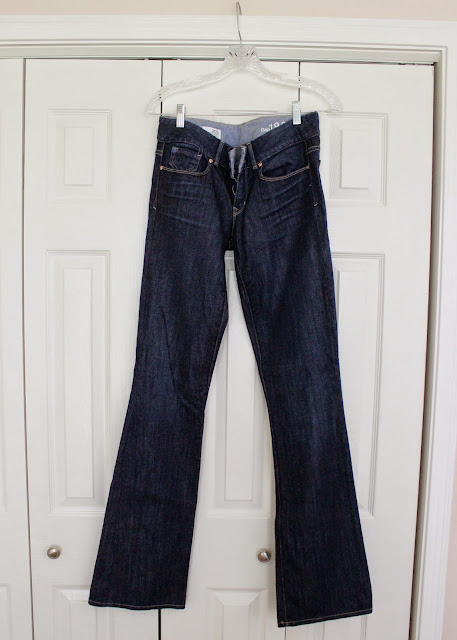 I recently did some spring cleaning and found I had a few nicer items I'd like to sale. All items are either new and never worn or lightly worn. There's a separate post for each items. Below pictures is price, size, and details. Please comment on post with PayPal email to purchase.

Your purchases help support my Shoe Fund. While Sadie Ann was in the NICU, our dog, Katie, took it upon herself to let me know she didn't like my shoe collection. Especially my Jack Rogers, Tory Burch Revas, and leopard loafers - just to name a few. She also took a dive into Chris's closet.
No comments: 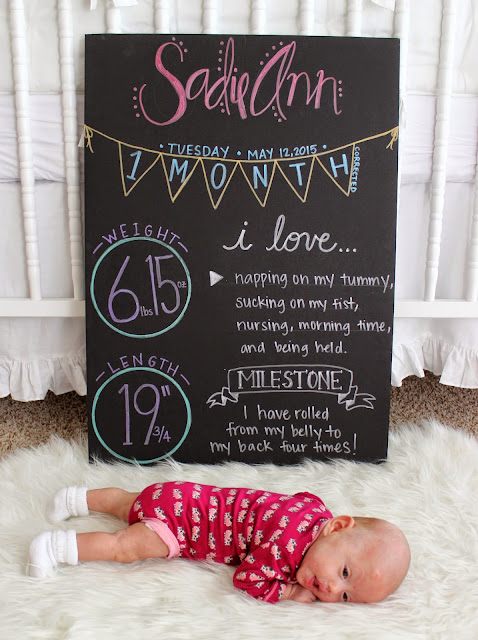 Exactly a month ago today, my girls were due. Although Sadie Ann is a few days away from being five months old #ICantEven, today she is one month corrected. I've been able to do the monthly stickers (see my Instagram for those), but I wanted to document additional information, so I decided to make these chalkboard signs. Preemies always have two ages - their actual age and their corrected (or adjusted) age.

When Sadie Ann was truly one month old, her board would have said something like "I love Ativan and Morphine." Her milestones would have been staying alive and only having a Grade 2 hemorrhage. She's come so far and is truly a miracle.

At her corrected one month she is almost seven pounds - which seems so big for her, but I know some babies are born at nine (or more!) pounds. As above, she loves being awake early in the morning - my little early bird. She also loves napping on her belly, being held (mommy loves that too), and nursing. She's also recently started sucking on her fist - mostly when she's hungry. It makes me giggle when she can't quite line up her fist to her mouth and she's almost chasing it back and forth. Silly girl. She loves hanging out in her spaceship (also known as a mamaroo) and being worn by mommy in one of her baby wraps.

She's starting to be very awake and alert between feedings. She's getting better and better with tracking. Occasionally she will move her eyes towards me when I say her name. And she's makes the sweetest cooing sounds when she's falling asleep. She also has a particular sound she makes when she "wants to talk to me".

I didn't put it above, but there are some things she really doesn't like. That includes diaper changes - the way she screams during a diaper change is really frightening. You'd think someone was really hurting her. It's a little excessive. She's also not crazy about baths yet. Through some of it she screams and other times I think she's really loving it, but doesn't want to let on that she is.

This little girl is also getting very strong. As mentioned above, on her board, she's sometimes able to roll herself over from her belly to her back. If she doesn't roll over, she eventually does a 180 on her play mat with all that moving around and pushing. It's pretty impressive.

She's still wearing preemie clothes, but I think by next month's update, she'll be in newborn clothing. It's bittersweet. For so long I prayed for her to grow, get bigger, and get stronger, so it's really a celebration to see her grow out of clothes that once swallowed her whole. On the other hand, I've only ever known her as a teeny, tiny baby and I already miss my little five pound baby that came home.

When I was planning Sadie Ann's nursery, I knew I wanted it to be soft and calming - the polar opposite of what the beginning of her life was. I immediately thought of pink and gold; as I continued to plan, I decided I would also incorporate whites, creams, mints, and corals. As far as style, it's eclectic. I blended modern, vintage, rustic, and romantic - it's a lot going on, but I think it works. I absolutely love this room. Chris and I agree it is our favorite room in the house. 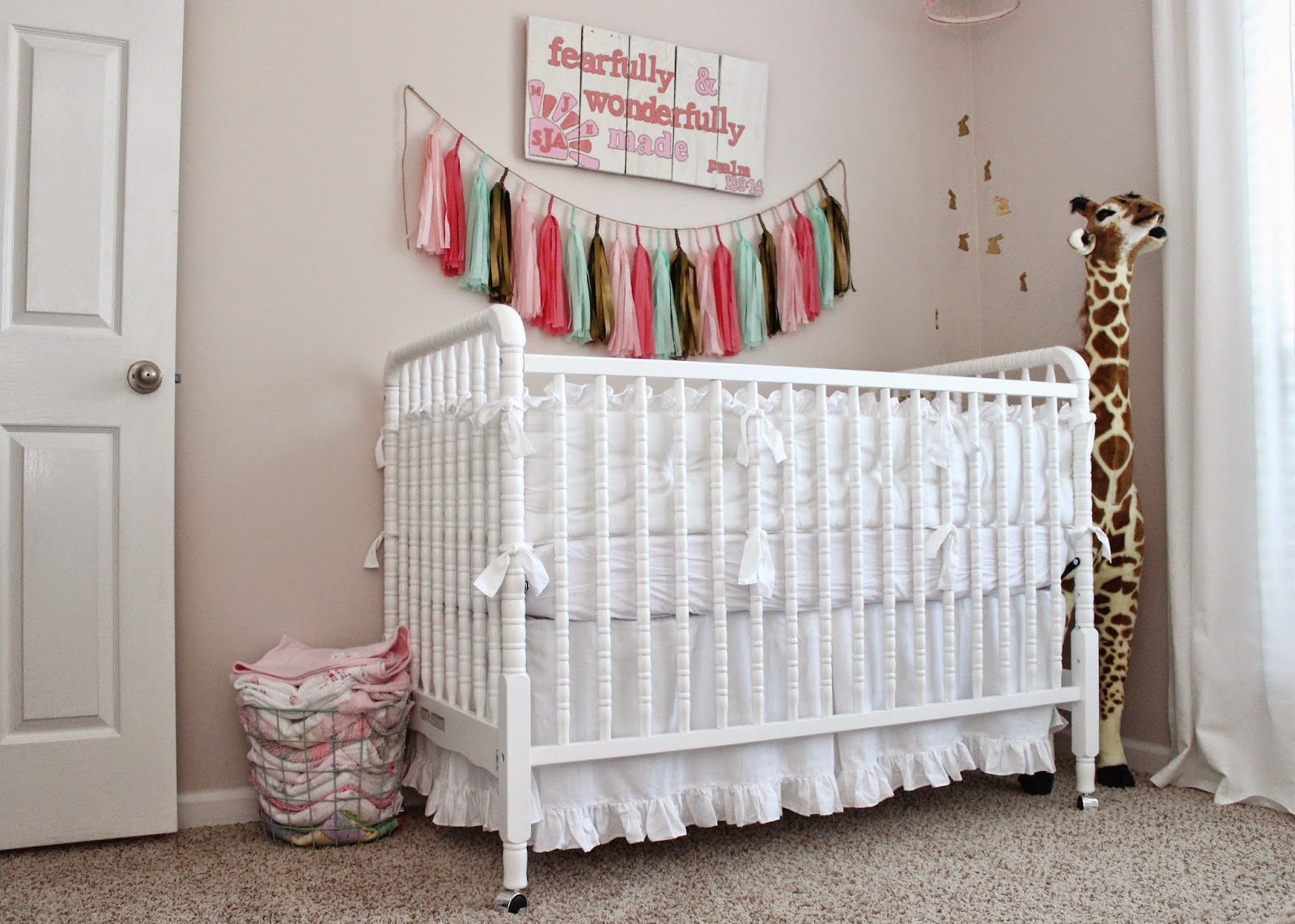 Chris insisted on the five-foot giraffe. We call her Ginger. 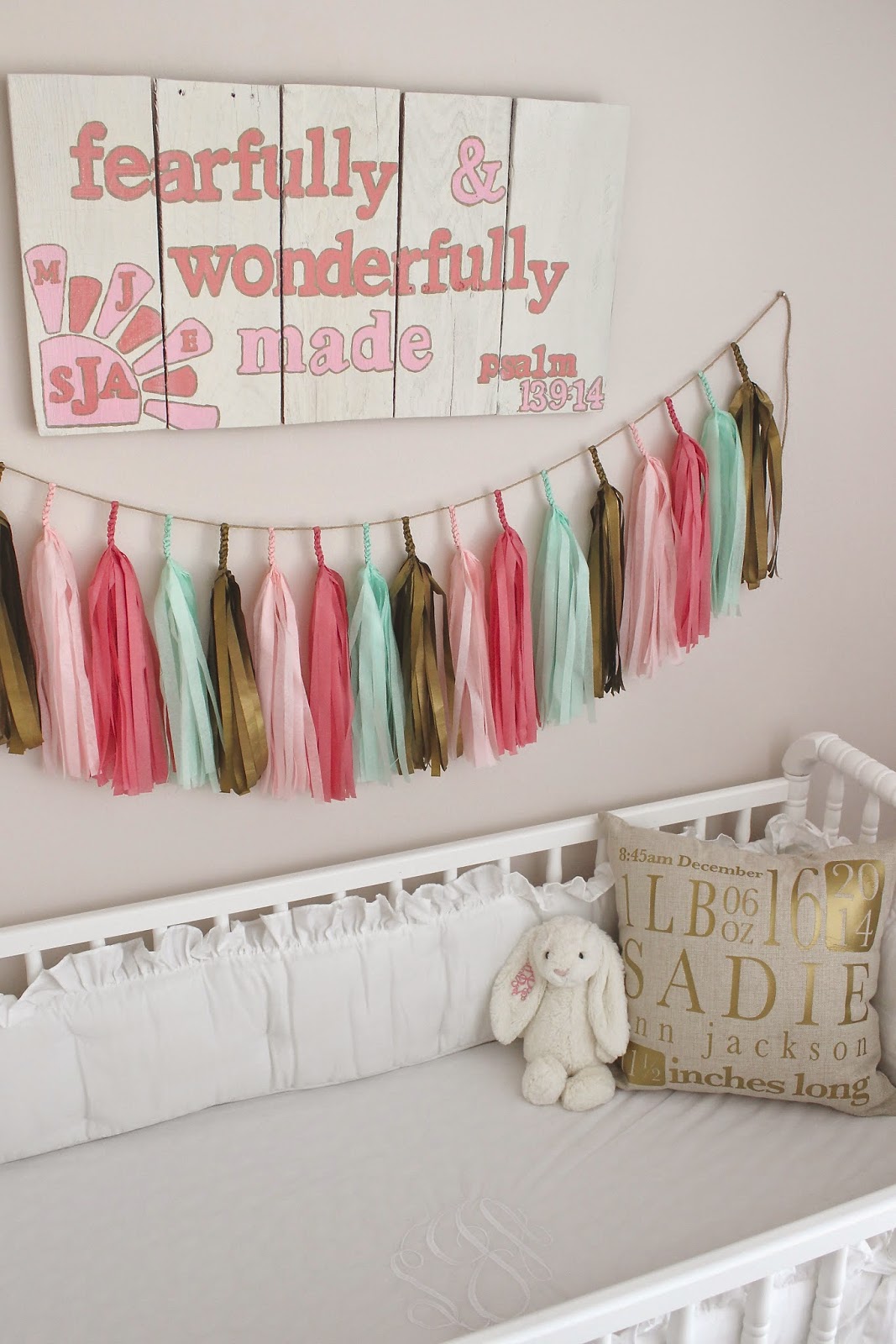 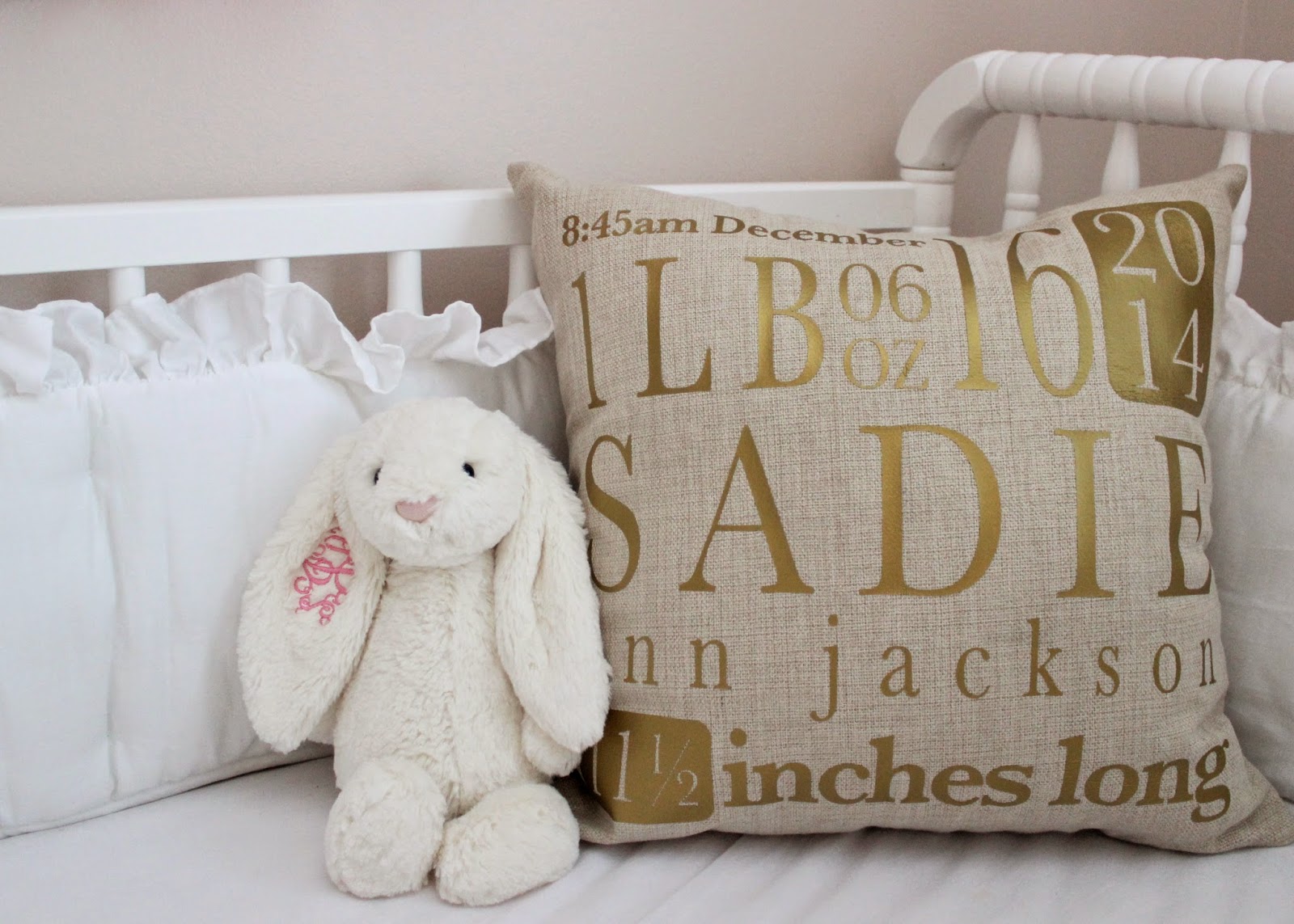 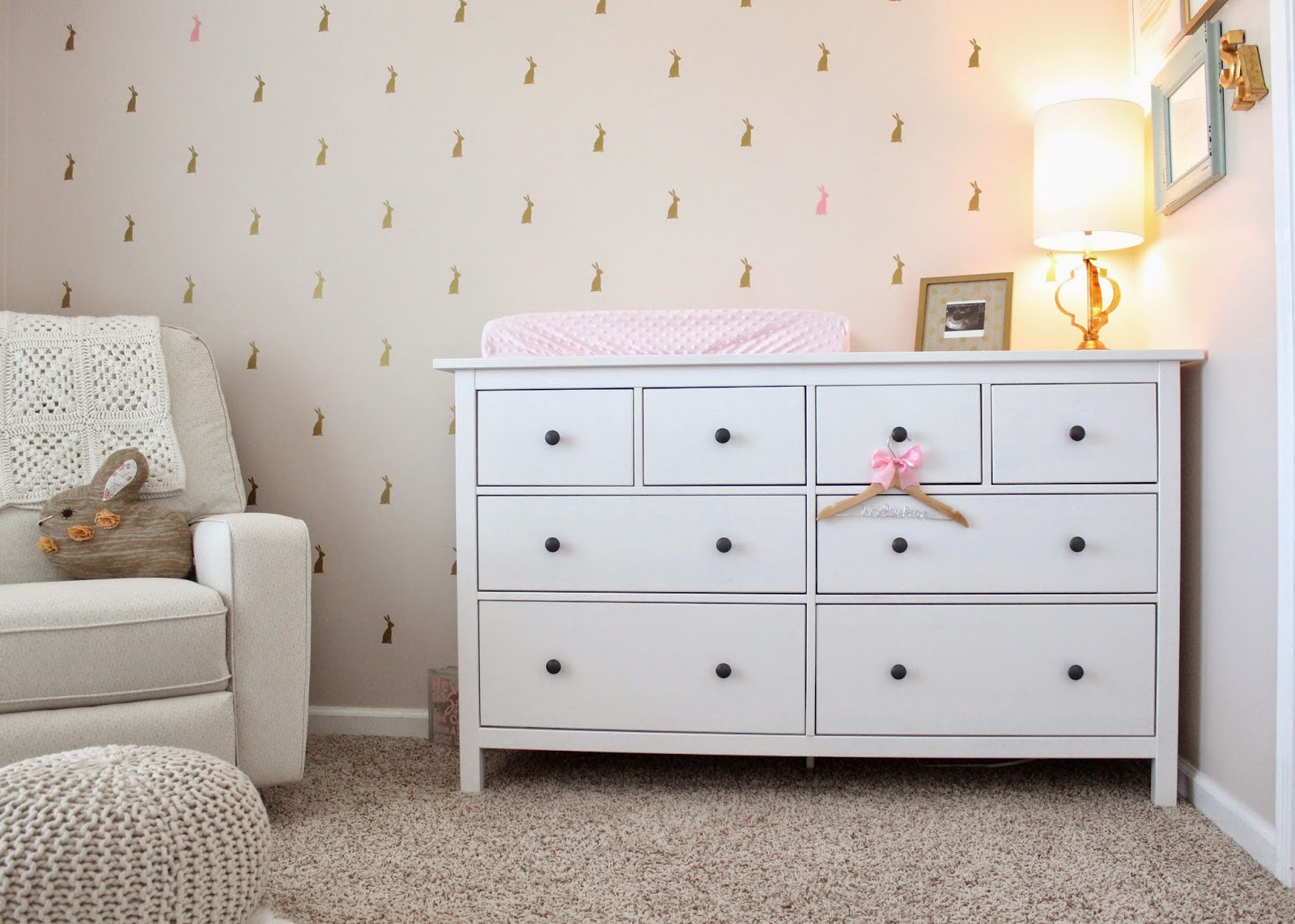 The bunny wall! 90 gold bunnies and two pink bunnies. Chris and I spent an afternoon placing each decal on the wall. It was tedious, but completely worth it. 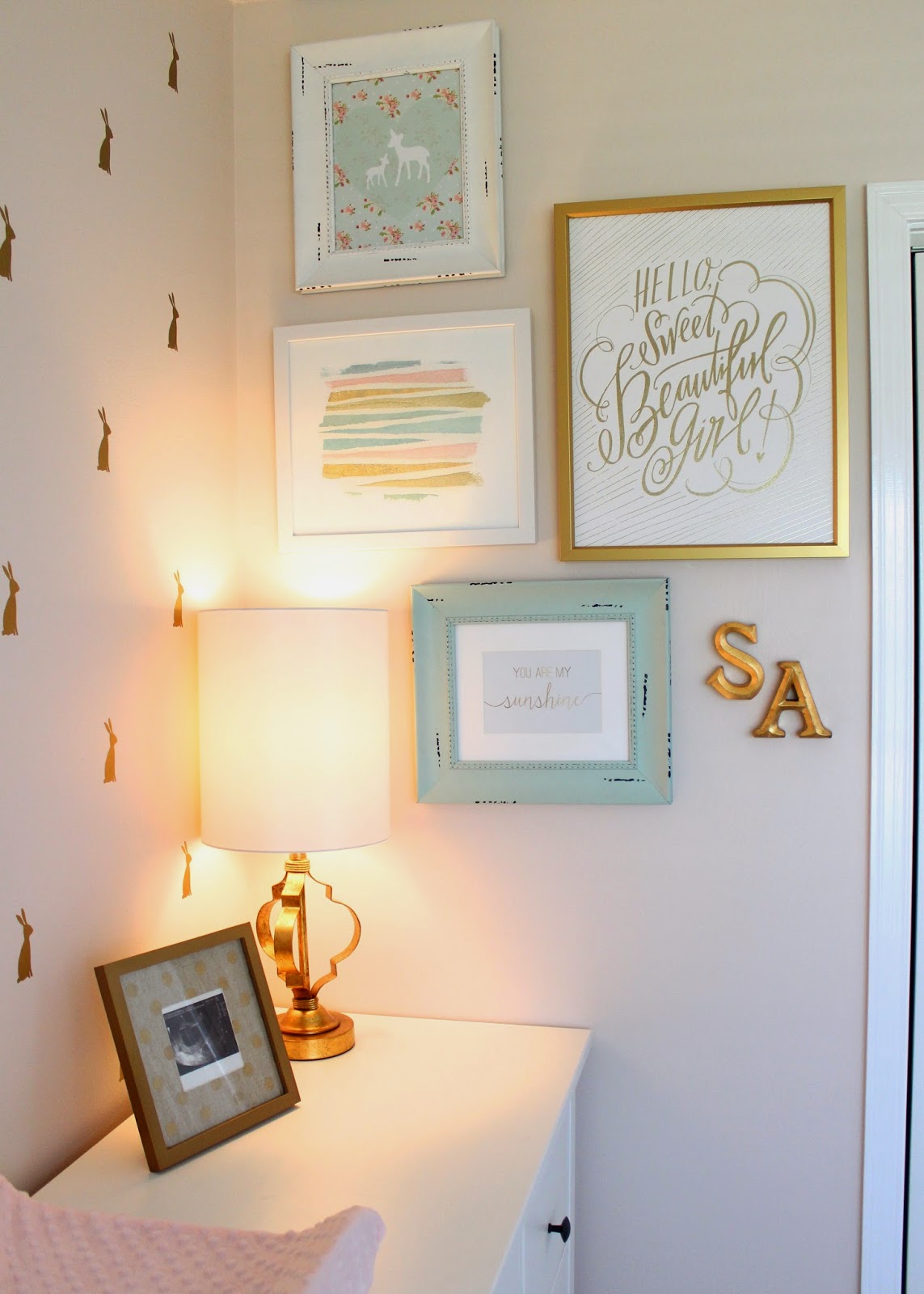 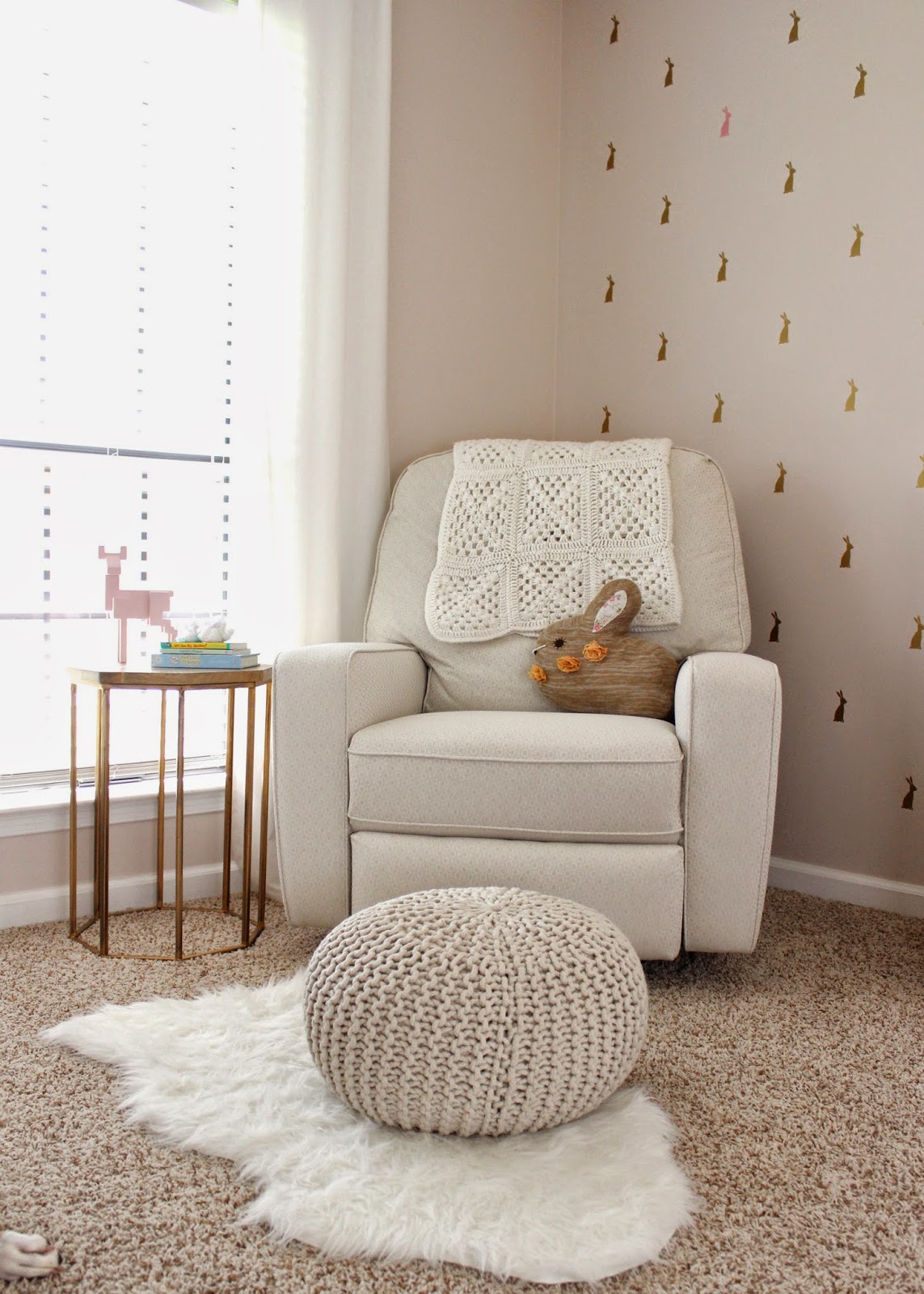 Here's some unsolicited advice for those of you who may be in the market for a nursery chair. I highly recommend one that glides, reclines, and swivels. We haven't used the recliner yet, but I have a feeling as she gets older we will. I also recommend some type of ottoman and the high back. I can't image not having somewhere to rest my head when I'm feeding her at three o'clock in the morning. 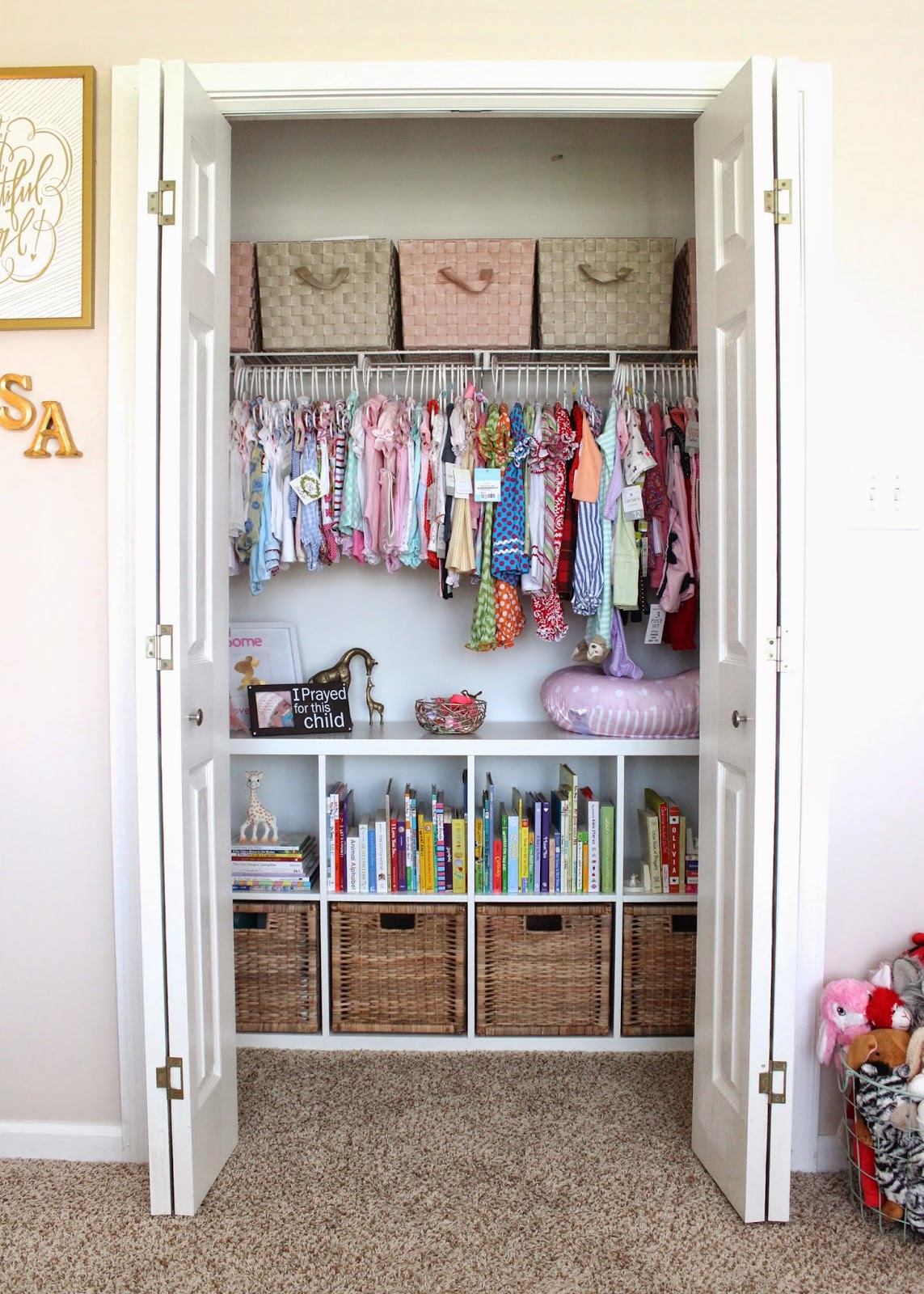 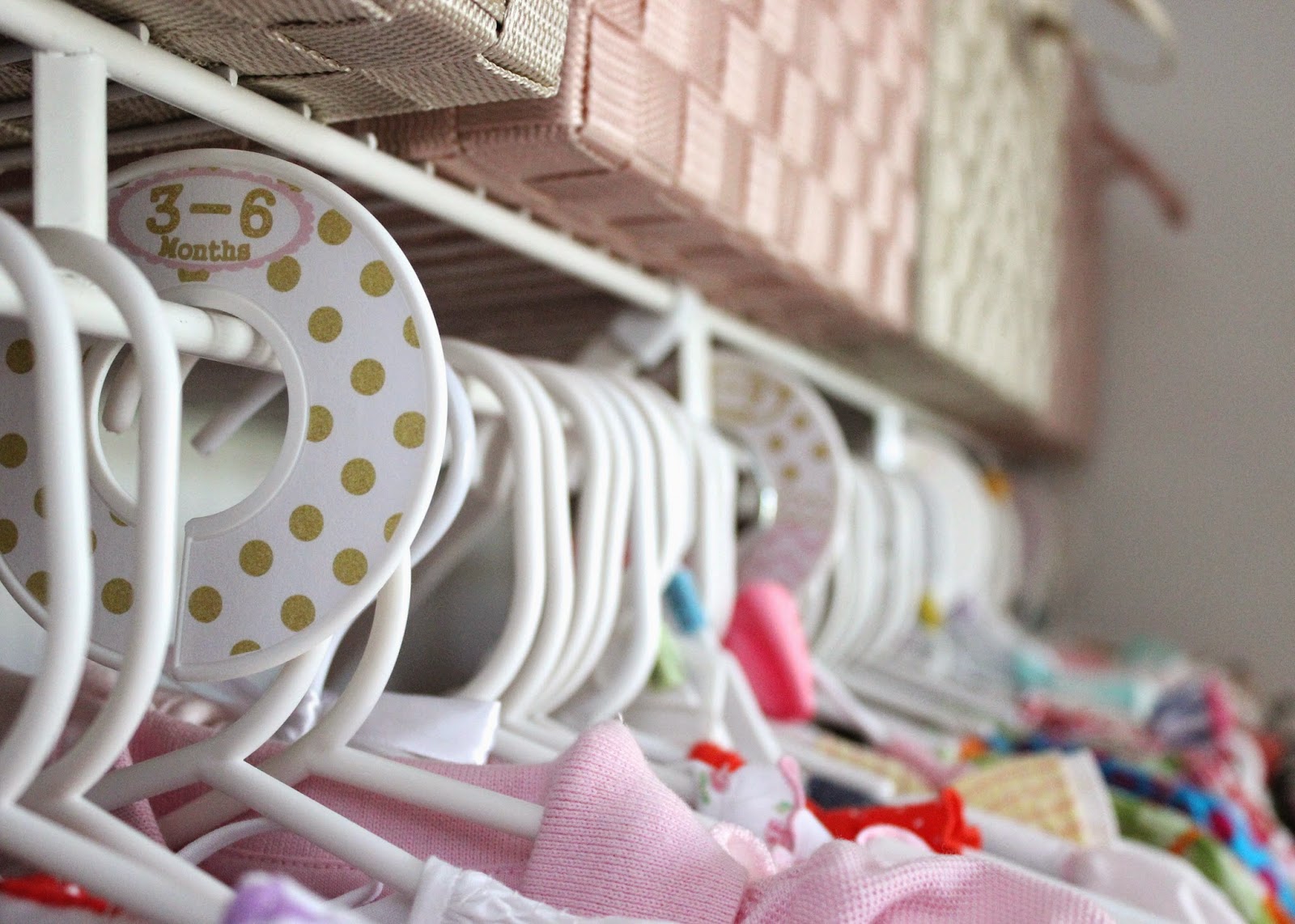 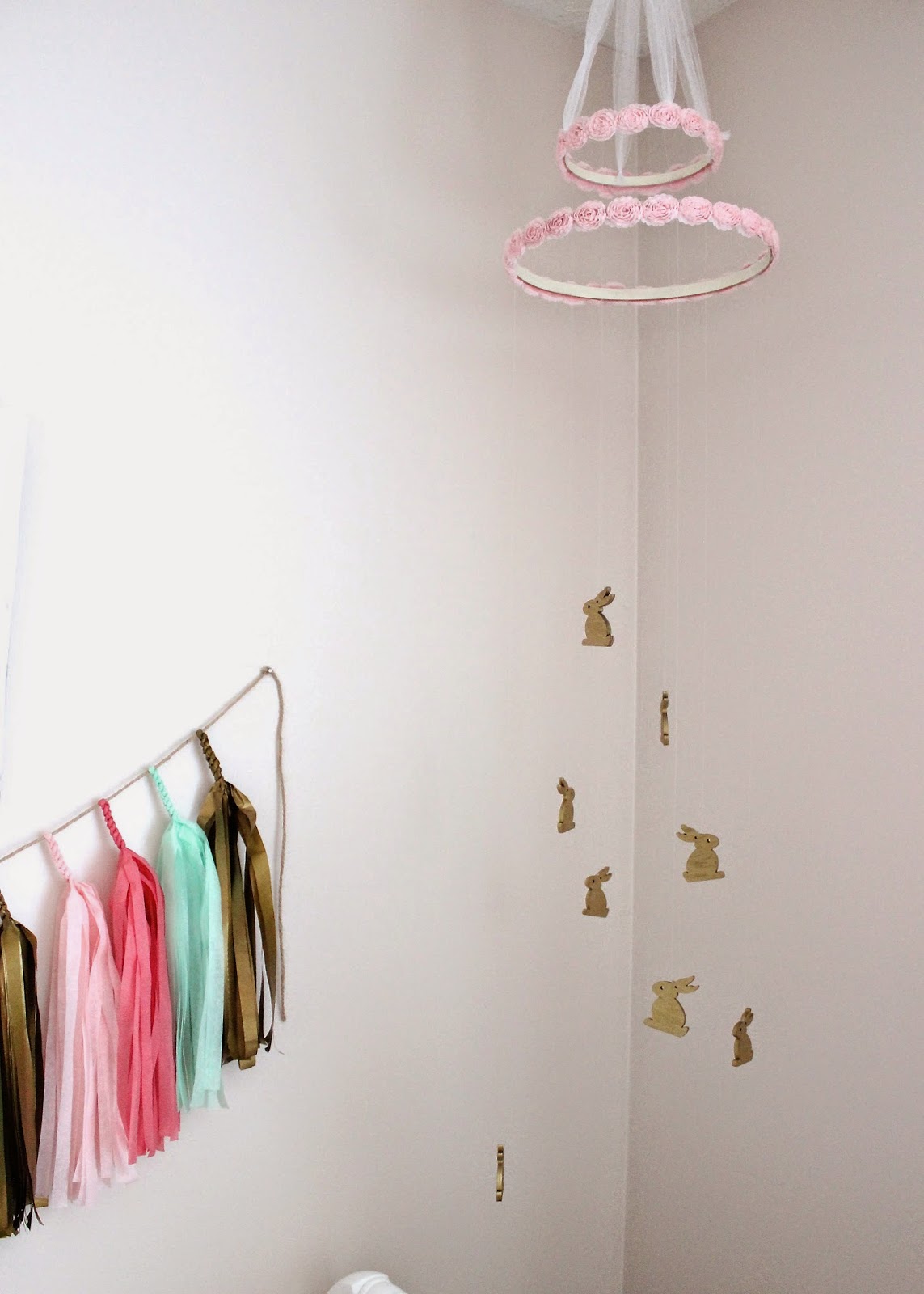 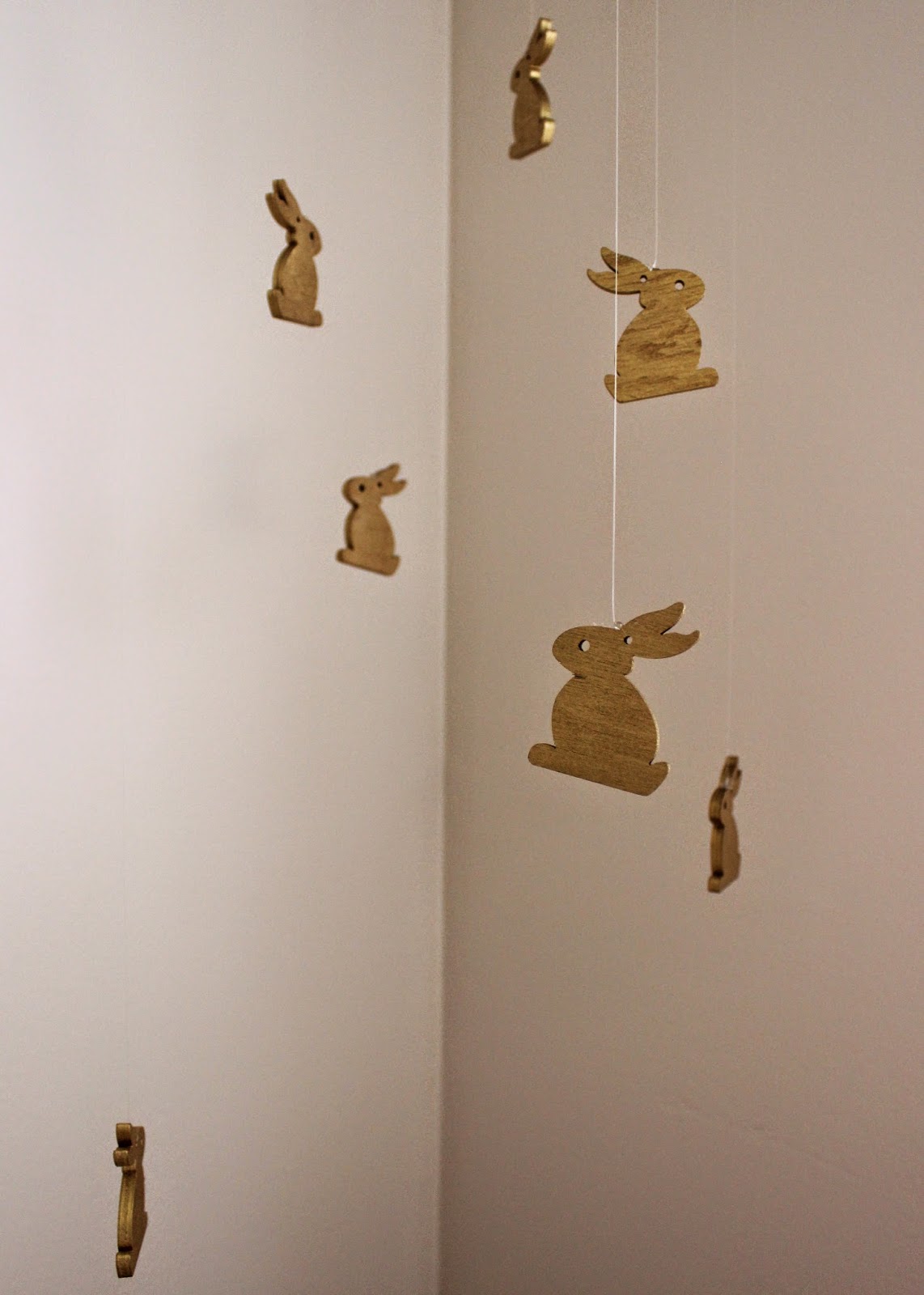 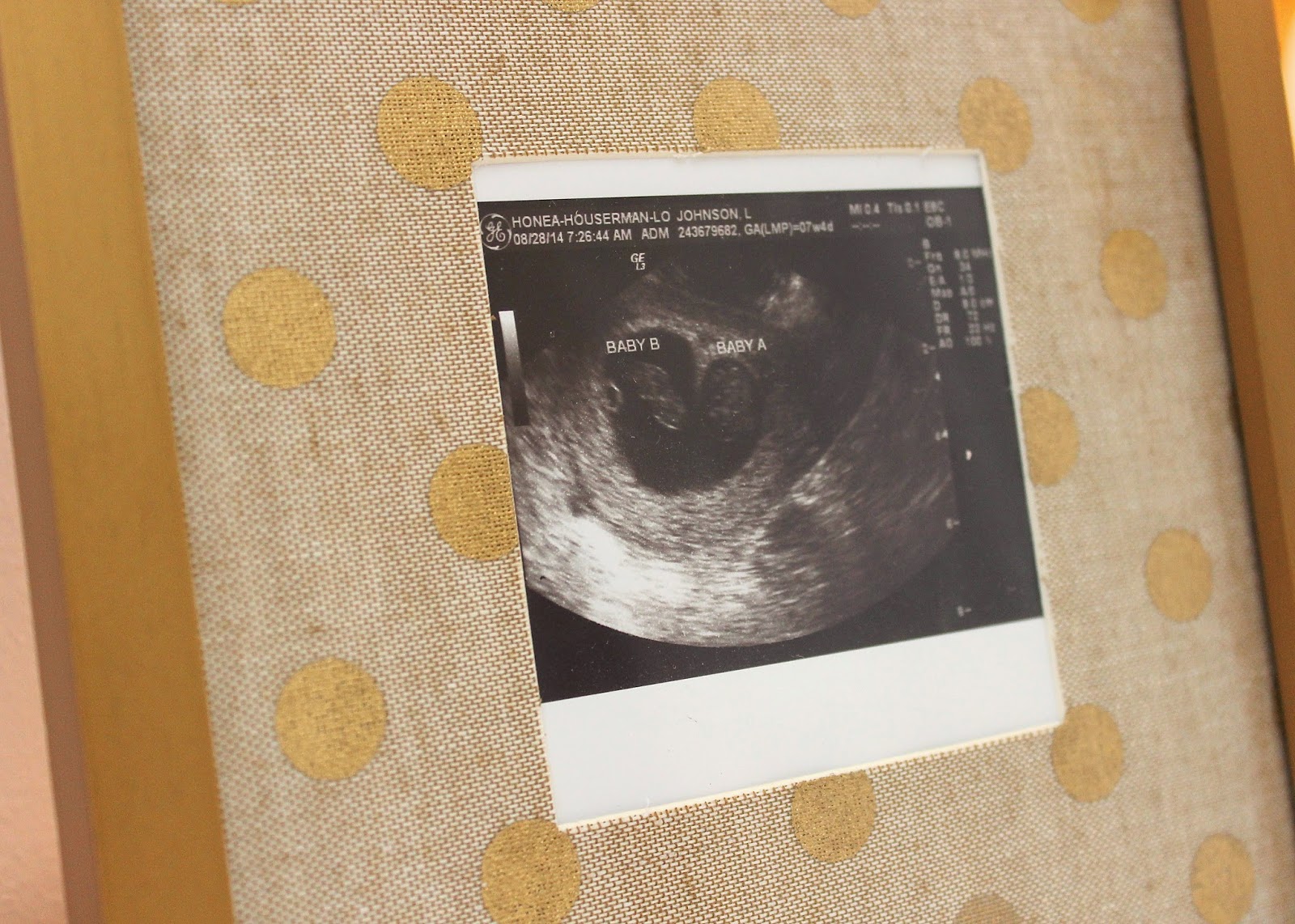 This ultrasound picture is so special. It was my second ultrasound and I was seven weeks along at the time. The girls were small enough that they both could be seen together on the screen - and they are in the shape of a heart. It's one of the only pictures I have of both of my girls together in one picture. I plan to have this picture enlarged and transferred onto a canvas to hang in our home. 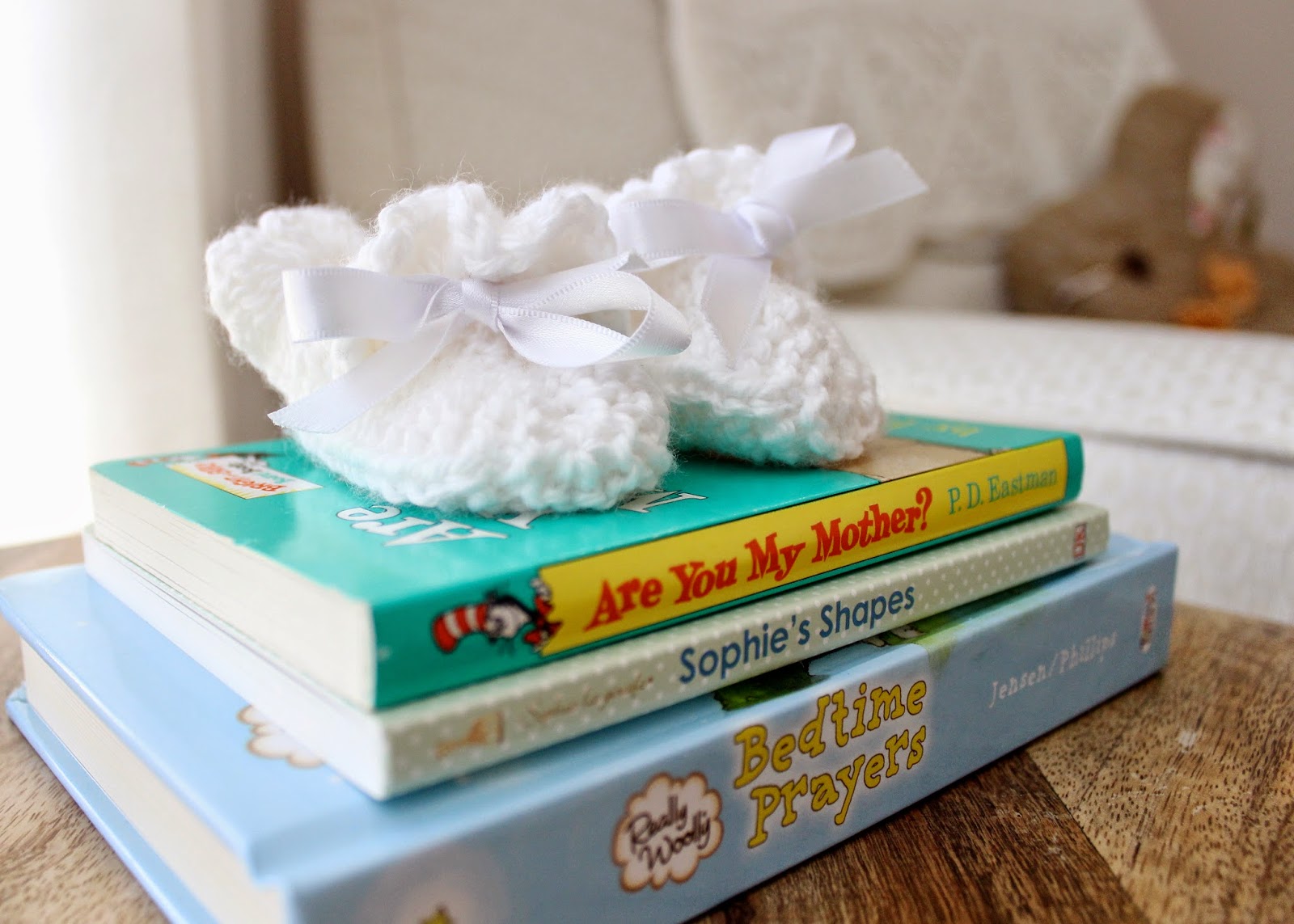 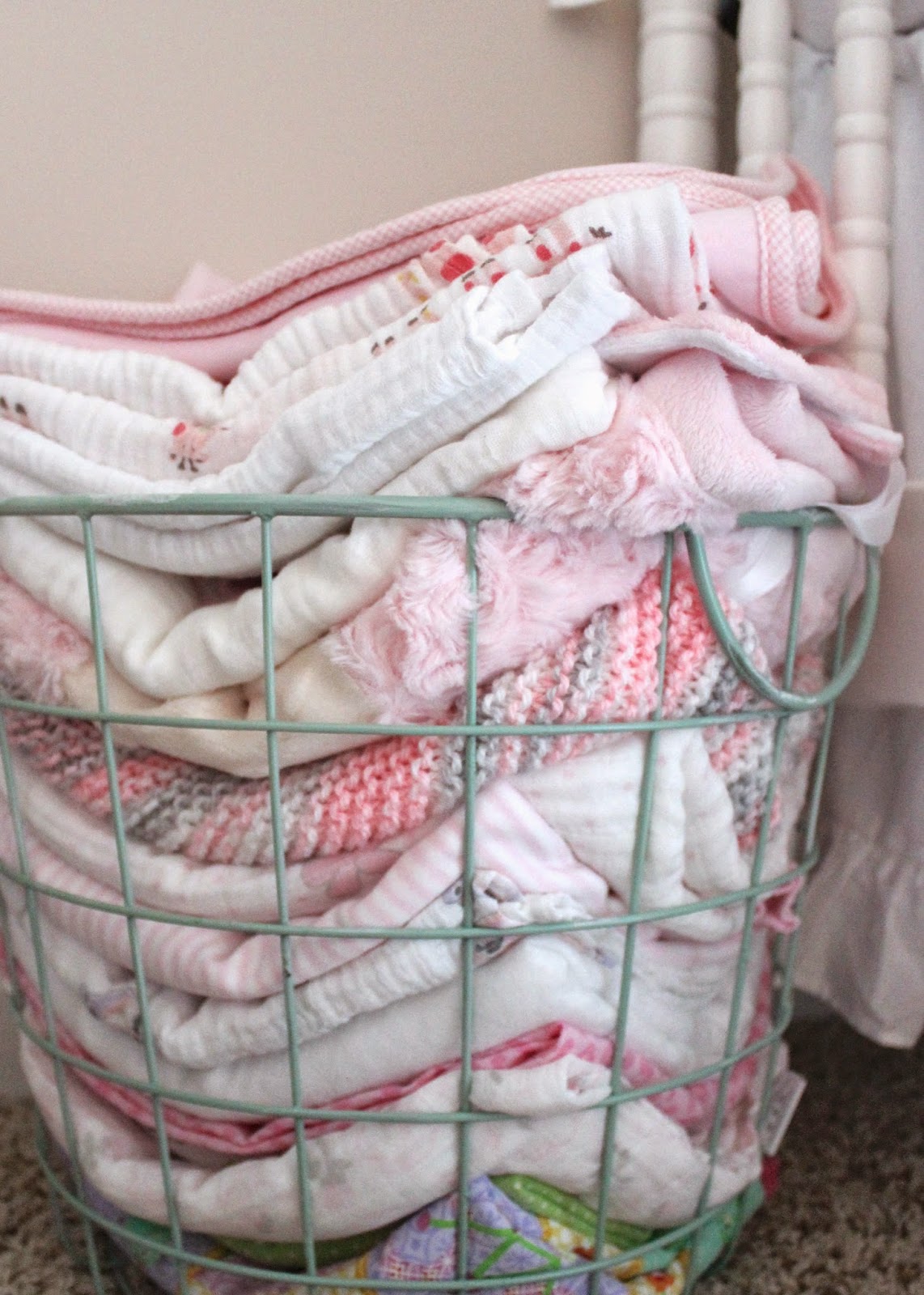 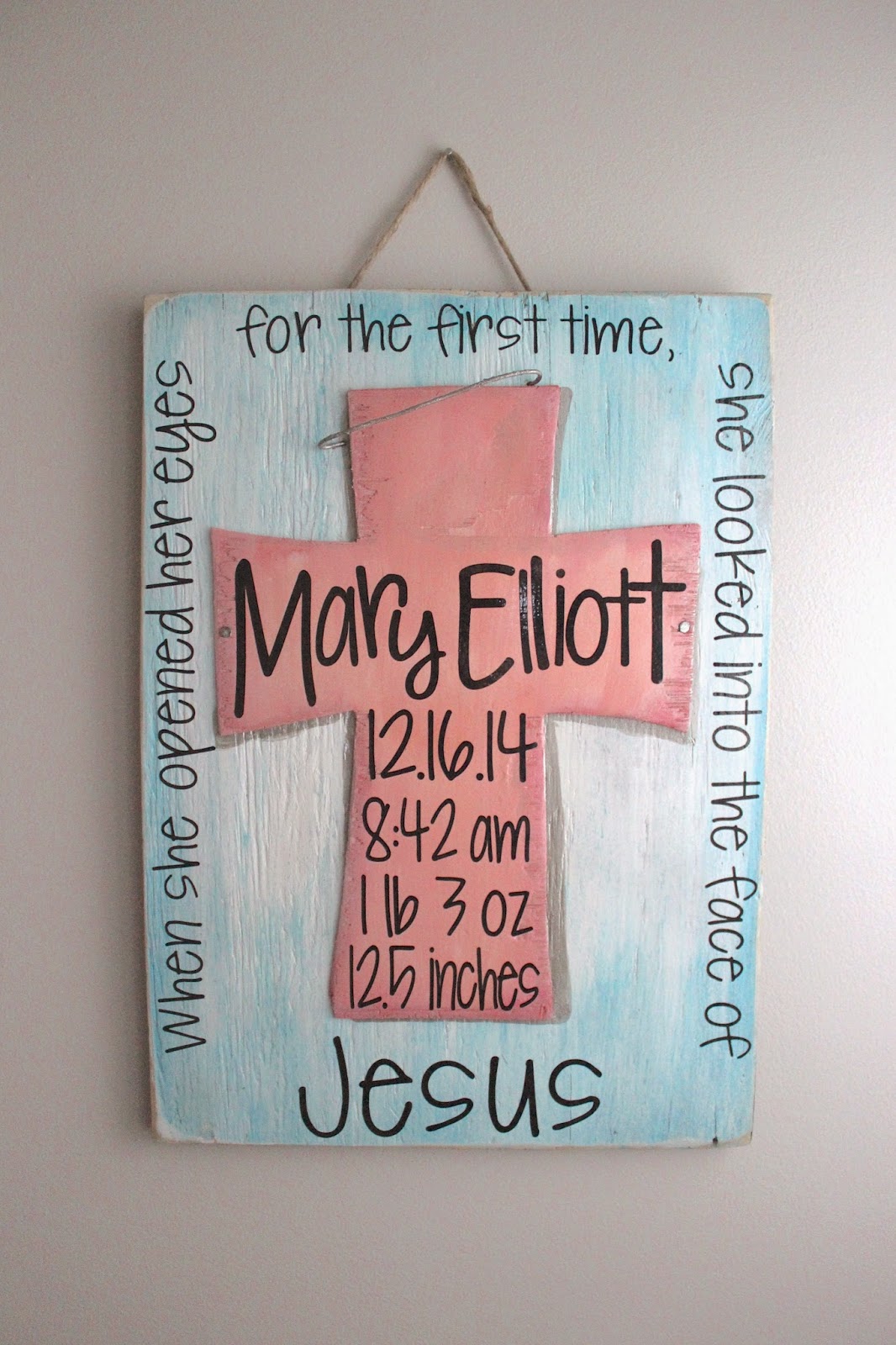 This hangs just outside of Sadie Ann's nursery and is a beautiful reminder of her twin sister. 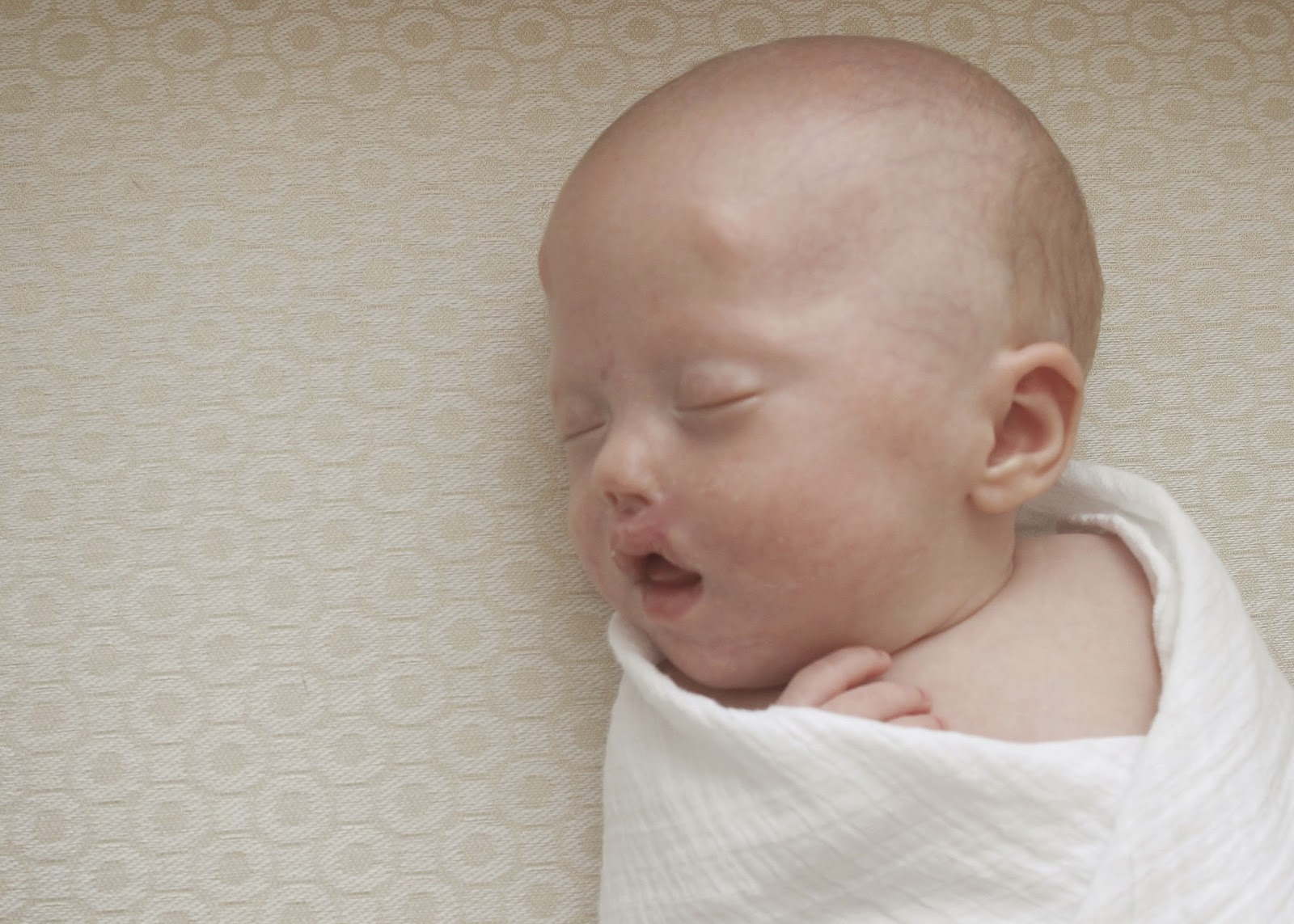 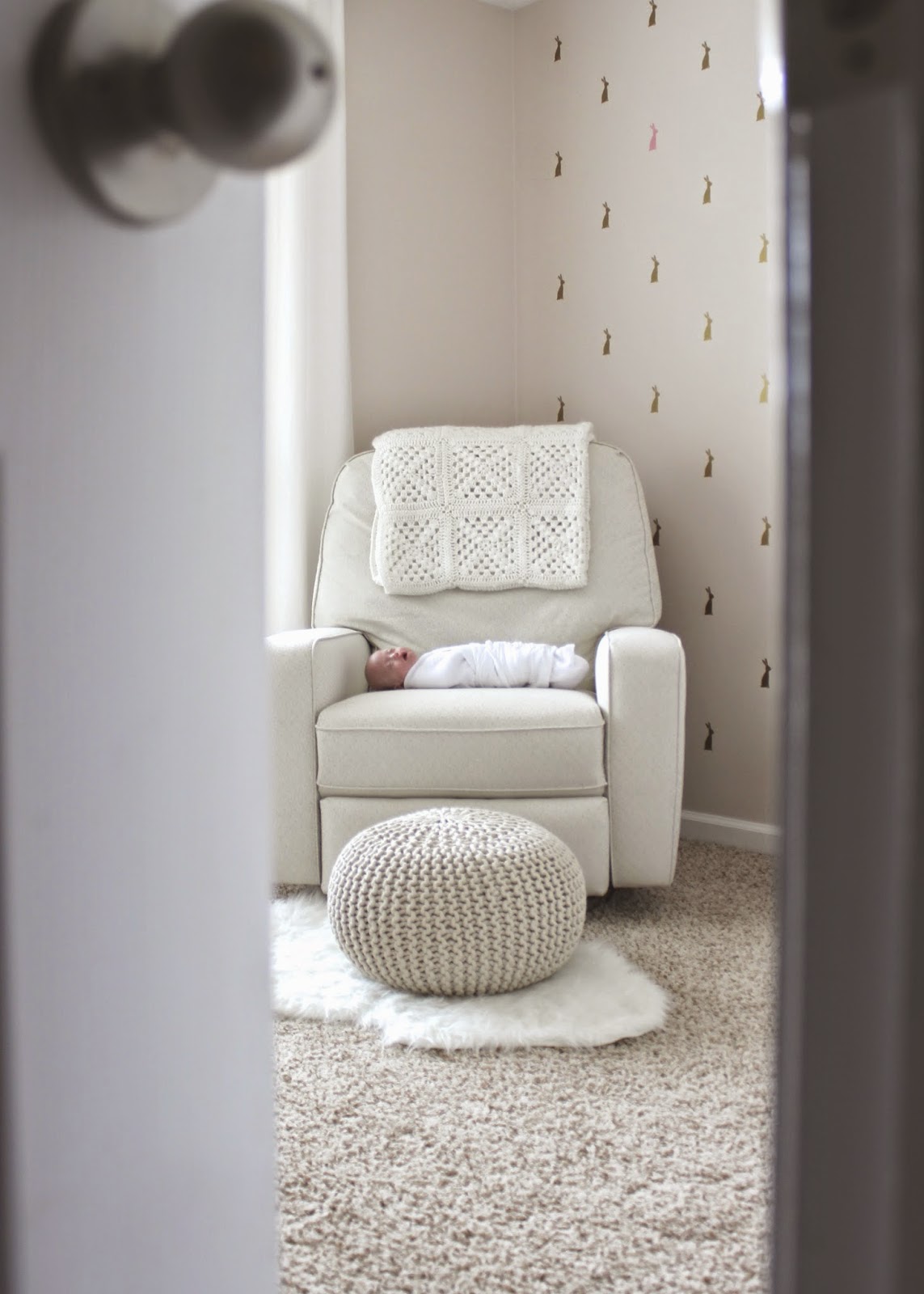 And, of course, I had to snap a few of my sweet girl.