Journey to Baby: First Visit with a Fertility Specialist

There are some situations in life where you think to yourself that will never happen to me.

Since starting our journey, I've learned anything is possible. You're not immune to something just because you can't image yourself in a particular situation or a certain way. I mean, let's be real, who images themselves as infertile? The answer: no one. So my point: thinking that will never happen to me is simply juvenile. With age comes wisdom; I've learned anything can happen.

Going to see a Reproductive Endocrinologist (RE) was something I never imaged we'd have to do. Never. But there we were - sitting in cozy waiting room, watching HGTV with five other couples. Anxiously waiting our name to be called.

While waiting, I zoned out of watching HGTV (which rarely happens) and I was thankful. Thankful that different situations within the last year and a half had led us to where we were sitting. Thankful that God works in ways that are beyond comprehension, but always on time and perfect. Thankful that we were about to sit down with a specialist that not only deals with infertility on a daily basis, but also dealt with it personally. Someone not only beyond knowledgeable about what we were going through, but understood it on an empathetic level - not something all doctors can offer. She possessed extensive knowledge and experience to pinpoint our individual issues and needs; she could lead us towards finally starting a family. I was sitting in that waiting room with a smile on my face. Though I had never imagined this scenario, I had faith that we were on the right track.

My name was called. Just like that, a new chapter of this journey had begun. We went back and immediately sat down with the RE. She didn't waste our time with frills or fluff or trying to be our best friend. She took her role seriously - which we greatly appreciated. She was informative and straight to the point, but threw in just enough dry humor to make us feel comfortable. We instantly loved her.

Our meeting with the RE was educational. She'd seen our papers and from that information, she was able to ask us additional questions regarding our failed attempts to conceive and sustain a pregnancy in the past. We sat and talked with her for about 45 minutes. She then loaded us up with information, recommendations, and a plan moving forward.

Even though we were just getting started, sitting and conversing with this doctor felt like the weight of two hundred tons being lifted from our shoulders. No we were't magically going to get pregnant that day and yes we still have a long road ahead of us, but now we have a plan. A doctor overseeing every move we make. We had medical intervention as needed at our fingertips. And extensive testing was going to be done so we could figure out and focus on our individual needs to move forward.

After our discussion with the RE, she diagnosed me with two things: polycystic ovarian syndrome (PCOS) and labeled me a habitual aborter (since I'd had two or more miscarriages in the past). Habitual aborter… geez. Could there be a worse term?

Following the sit-down with the doctor, we then met with a financial counselor. We discussed what we already knew… our insurance wasn't paying a dime for infertility treatment. We went over out of pocket costs and costs for IVF should we need to go that route in the future. We expressed that although insurance isn't paying, we still want to move forward with the necessary testing and procedures to start our family. Baby Chrinley (out celebrity name) would be worth every penny!

Following us signing over all finical responsibility, I got the privilege of then sitting in a tiny, cold room with nothing but a paper blanket and paper vest. That's right. It was the first visit and we were already getting real personal. The doctor ordered a Pap smear and an ultrasound. The pap was pretty self explanatory. The ultrasound was to see what my ovaries and uterus were looking like at this particular point in my cycle. All were looking fine and dandy.

I was then reunited with Chris and we sat down with the nurse. She basically reiterated most of what the doctor discussed and recommended - and then went a little more into detail about our plans moving forward into my next cycle.

Our last stop was with the phlebotomist. The nurse gave us snacks and Sprites prior to having our blood work done and I'm sure glad she did. The RE ordered several different blood panels and was very thorough with doing all the blood work necessary and possible. They took five vials of blood from Chris and they took… wait for it… 20 from me. Yeah, 20. Count 'em. 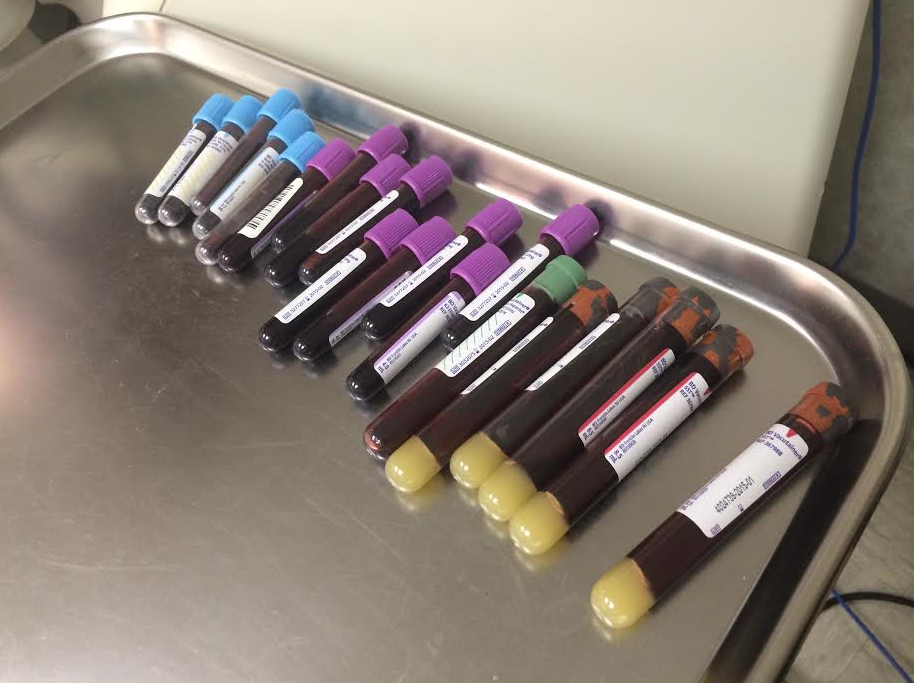 We ended up spending about four hours at the clinic - which sounds awful, but it really wasn't too bad. We were given a lot of information and a plan for moving forward. The staff was incredibly kind and very aware that they were dealing with patients and couples that fail on their own to conceive and they were sensitive to that. It was such a pleasant experience.

If you've been struggling to conceive for a significant amount of time and you're wondering if you should move forward with a specialist - my recommendation is DO IT! They specialize in exactly what you are going through. Like I said before, trying and failing to conceive is emotionally (and physically) exhausting and there's only so much you can do on your own when infertility is an issue. There comes a time where a decision has to be made and I'm so incredibly thankful we did. Do your research and find a clinic or group that works for your particular situation.

Thank you for sharing this next part of your journey. It sounds like the visit made you feel more confidant and hopeful. :)

It's nice to be heard, to have a plan and to get as much information as you can. I'm so sorry she called you a "habitual aborter"! I guess I'm one too, since I've had two miscarriages as well. Is there a plan to prevent another miscarriage? My doc is doing progesterone and baby aspirin. Hopefully that does the trick.

Good luck Linley! I'm right there with ya!

Thank you for sharing! You are so strong! :)