One Year Later: Finding Out We Were Having Twins

I mentioned in a previous post that in the upcoming weeks and months one year anniversaries will begin to pass by. Since the last year (or so) has been a blur, I’ll be using these one-year markers to remember those moments – joyful and painful. I just want to put into words the memories and feelings those days possessed in order to remember and to share. Since beginning our infertility journey, it’s been incredibly important to me to share these moments – good or bad – in hopes that it could possibly be a small light for those in similar situations seeking some level of comfort in uncomfortable situations. I’ll be the first to tell you, when I need information, I hit the World Wide Web. So I pray that these posts will reach women, men, or families that need it.

So here we are.

Last year on this day Chris and I walked into our fertility clinic and were placed in a small room with an exam bed and an ultrasound machine. I found out I was pregnant two weeks prior via a blood test. My blood work suggested a successful pregnancy with numbers increasing appropriately. Today was the day we would finally (finally!) get to see the life inside of me.

In the past two weeks we had briefly discussed and guessed how many babies we could possibly be expecting. Ultrasounds prior to our IUI showed I had three mature eggs. So we knew it was possible that there could be three babies. Or there could be one. Or two. Or even six if all three released, fertilized, and multiplied (whoa!) - as multiples do run in my family.

But it didn’t matter. God was in control and how ever many were in there would be a blessing and a gift.

In the forefront of my mind, I felt like there was one. Deep in a tiny, quiet and calm part of my heart, I knew there would be two. I knew. God had been preparing me for two. I could not deny that and it was an indescribable deep-in-my-gut-feeling. But no matter what I felt or thought, the answer to our question of how many (a question only those who go through fertility treatment are thinking at the first ultrasound) was going to be answered in a matter of minutes.

I was sitting on the exam bed. Chris was holding my left hand and my right hand was keeping the paper sheet in place that covered my lower body. It didn’t take long and in walked our nurse practitioner and the sonographer.

It felt like a matter of seconds that I was lying on the exam table and anxiously looking at the ultrasound screen. Before I could even cock my head to look at the screen straight on, before I could even make sense of the black and gray images constantly changing shape, before I could even take a deep breath in preparation for the news I was about to hear, I heard the words, “So how do y’all feel about two?”

“Yes, there are two. You’re having twins! Congratulations!”

It was like confetti was flying across the room and a loud applause began. I wanted to shout in excitement! Scream! Cry! Jump! Do cartwheels! It was the #BestNewsEver

We squeezed each other’s hands. We exchanged a look that I won’t even attempt to describe. Chris leaned down to give me a kiss. I had faint tears in my eyes for the pure joy of the entire situation. I was really pregnant. It was no longer an hCG number or a double line. I saw my baby. I could see BOTH of my babies. I’d finally reached a point in my life that I had desired so badly. I was pregnant. Really pregnant. And there was proof on the screen. Nine beautiful months lied ahead. Life could not get better.

The NP went on to show us baby A and baby B in detail. I was five weeks and two days along. Baby B already had a heartbeat and we got to stare and gawk at the most beautiful and miraculous flicker. Baby A did not have a heart beat yet, but our NP assured us that the baby implanted after baby B and she was confident that A would have a heart beat next week. We trusted her. And sure enough, the following week both babies had strong heart beats in the 140’s.

We spent the rest of that day basking in the fact that we were expecting twins in the Spring of 2015. That our lives would inevitably be flipped upside down in a matter of nine months – but in the best way imaginable. Life was unfolding into something amazing and it was just getting started. We called our parents, brothers, sisters, grandparents, and close friends.

That night we went to bed with smiles on our faces – we were glowing from the day’s joyous news.  Praising God for the two lives growing inside of me. Hands down, the best day of our lives. 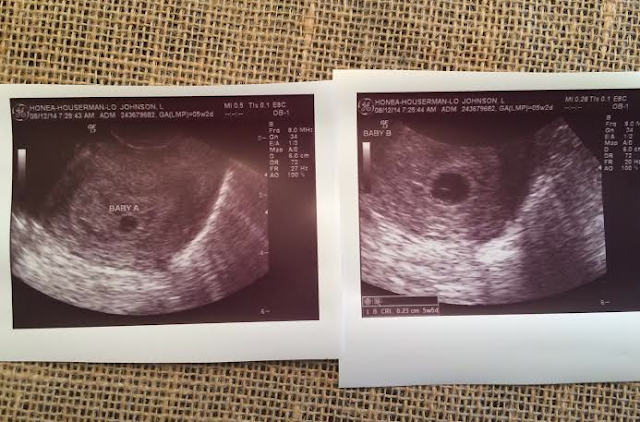