I have officially been in the hospital and on bed rest for over four weeks now - and on this past Sunday (November 30), I hit the 21 week mark! Which may not seem that monumental to most, but to have suffered a membrane rupture at 16w5d, it's a big deal. So Happy 21 Weeks to our precious little girls! 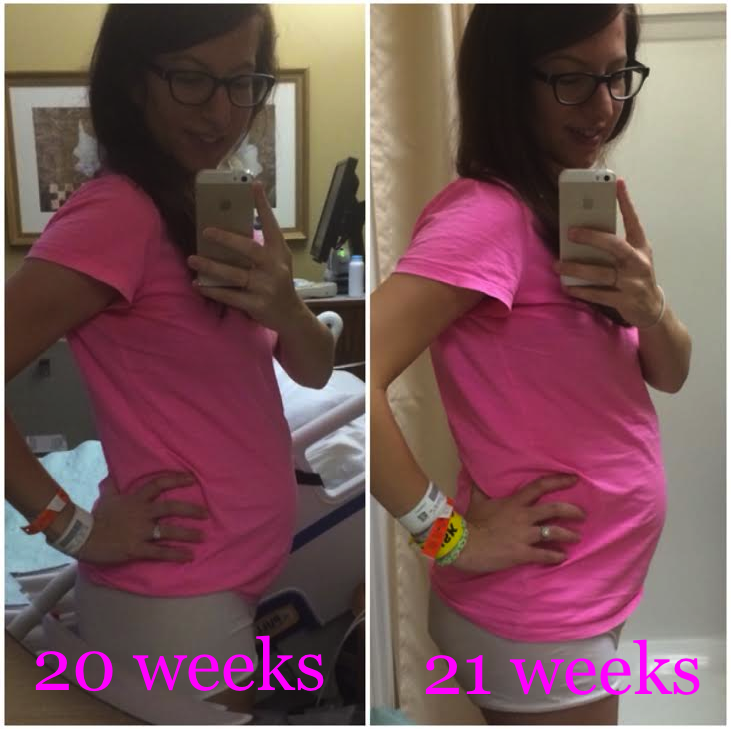 I love seeing how much they grow in just one week!

I attribute all success in this situation to God and the non-stop prayer we have received since this happened. Medically speaking, there's really nothing that has or can be done until 24 weeks other than the antibiotics I received the first week and bed rest. I spend 90% of my day in the bed. I don't lay flat, but close to it. I am allowed to get up to use the bathroom and I can take a shower, sitting down, every other day. I've become extremely weak due to the lack of activity - so getting up to use the restroom and my shower days are all exhausting. But I wouldn't have it any other way.

Enough about me. On to the babies.

The girls get ultrasounds every other day and at each ultrasound I'm just amazed at the work God is doing. Despite our little Mary Elliott's (baby A) lack of fluid, she continues to grow, move around, thrive, and have a full bladder. All very positive things that are nothing less than daily blessings. She and her sister always measure within a day of each other and on this past Saturday, they both were 20w6d and weighed 12-13oz. This Monday morning they had their second anatomy scan and all looked great! One of my favorite things to see on the ultrasound is both of the girls moving, usually trying to cuddle - and we've seen both of them have the hiccups. So adorable. Fills my heart with joy!

As far as my white blood cell count, it has remained stable at 13 for the past week - which is also an amazing blessing that infection is staying away.

As we made our way into 18 and 19 weeks, I began feeling slight movements inside of me - they felt like bubbles and light flutters. As 20 weeks passed by, those flutters became more frequent and have recently turned into full-on karate kicks. The girls are tiny, but they can throw a punch. Sometimes it startles me and then makes me giggle. Since Sadie Ann has fluid, her movements are the ones I feel most often. Mary Elliot's movements aren't as frequent because of her limited space - and because of the lack of fluid around her, her movements feel more like pokes. No matter what I feel, I'm just so in love with both of their completely different feelings of movement and so thankful to feel them on a daily basis - even when they wake me up at 2a..m..

I've started having Braxton Hicks. I actually believe I've been having them for several weeks now - even a couple weeks before all this happened. When I first had them, I attributed it to the babies shifting around and just being anterior in the womb. However, my doctor mentioned last week that I may be feeling them soon. Since I'd never been this far along in a pregnancy, I had no clue what to expect and as I did my research on them, I began to realize that the tightness I'd occasionally feel maybe wasn't the babies moving about. In the past couple weeks they've definitely become noticeable and frequent. My doctor said that up to four an hour can be normal. Sometimes I have that many an hour and then sometimes I don't have any for several hours. She said that was normal too - easing my mommy brain.

I've also been so blessed to have my mom and mother in law stay with me every. single. day. since I was admitted. My mom took a month off from work and spent all of November here. She went home over the weekend and my mother in law traveled over to spend the next three (yeah, three!) weeks hanging out in room 205. Chris has spent every night since Halloween here with me without a single complaint. They've all been so selfless and generous with their time and I appreciate it more than what I could ever express.

So that's some of our big updates as of 21 weeks. Our first big goal is still 24 weeks - which is the Sunday before Christmas. Once we make it to 24 weeks, I'll receive a set of steroid shots that will help with the development of Mary Elliott's lungs secondary to her lack of fluid which plays a crucial role in lung development. It will actually help with both of the girls' lungs in case they do come a lot earlier than planned. Lord willing, once we make it to 24 weeks and get the shots we can breathe a small tiny sigh of relief and then we will look on towards 26 weeks. Following a conversation about how much we both love Thanksgiving food, my doctor told me that if we can make it to 26 weeks she'll feel really good - turkey, gravy, and stuffing good.

We continue to pray and ask for prayers for our little girls.


The LORD himself goes before you and will be with you; he will never leave you nor forsake you. Do not be afraid; do not be discouraged.
Deuteronomy 31:8

Thank you so much for the update, Linley! You and your sweet girls are in my thoughts and prayers. It sounds like you have an amazing support system.

Continual prayers for you, Mary Elliot and Sadie Ann!

Wonderful update! Continuing to pray for you all!