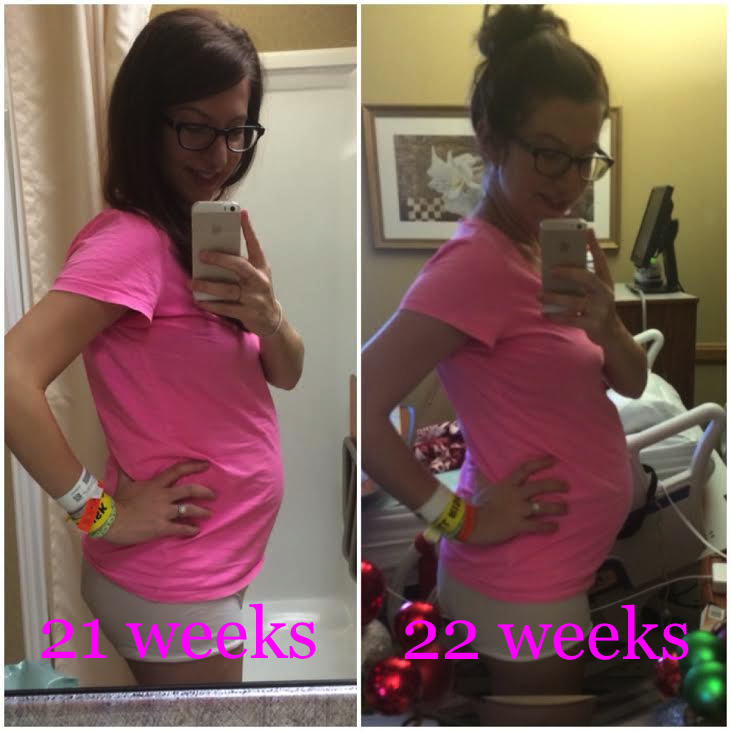 As you can see in this picture, my little pink tee is getting tighter and tighter - which I love! I'm even starting to fill out in my upper abdomen area. These girls are growing!

This past week has been a good one, full of many blessings. As I've mentioned, the girls are receiving an ultrasound every other day. Last week, I ask my ultrasonographer what the babies were weighing. She told me ONE pound each! I could not believe it. They are a pound! Such a blessing.

Then this morning my doctor came in and told be they were both 1lb 2oz!!!

This past Friday morning the girls had an extra long anatomy scan - a typically anxiety-ridden exam. It was completed later in the morning, after my doctor had already stopped by for the day. It wasn't until the next morning that she pulled up the report in my room and read it to Chris and me… "No abnormalities seen in baby A; no abnormalities seen in baby B." There's nothing like getting that kind of news first thing in the morning. All praises to the Lord! What a beautiful report. She went on to tell us that Mary Elliott continues to grow and keep up with her sister. Despite her ruptured sac and lack of fluid, she continues to move about and grow. I'm such a thankful and proud mommy.

Sunday the girls and I rolled over to 22 weeks - meaning we are now on the two week countdown to 24 weeks! I hope and pray these next two weeks we continue to remain stable, the girls continue to grow, no infections come about, and that the days don't all of a sudden start to slow down. Again, at 24 weeks, I get my steroid injections to help with the babies' lungs and they past the point of viability in which they have a chance of survival should they decide to come that early. I've advised them to stay put for several more weeks - let's hope they listen to their mommy.

I've put on eight pounds since being admitted to the hospital. Which I attribute to three fully-loaded trays a day, snacks my doctor ordered me between all means, and the constant sweets and treats that friends and family bring me daily.

This past week I spent the majority of my time taking online CEU classes. I needed to complete them anyway, but of course I received a letter in the mail not long ago that I was being audited by the state. So that just means I need to turn in some extra paperwork and turn it in earlier than what I would normally have to since it all has to be audited. Thankfully, I finished it all, my paperwork is completed, and was mailed out this morning. Shew!

Also in the last week, my sweet mother in law brought in some Christmas decorations to liven up my tiny room! I have a wreath on my door, garland on the mirror and bulletin board, and a precious Christmas tree. It's all just perfect!

Yesterday she brought in crafts for us to make a countdown to 24 weeks! It's in the shape of a banner with pom poms. We have it all made and set up - and each day, at the end of the day, we will cut off a pom pom until we get to 24 weeks. Then we'll make a new one that will count us down to 26 weeks… and so on. 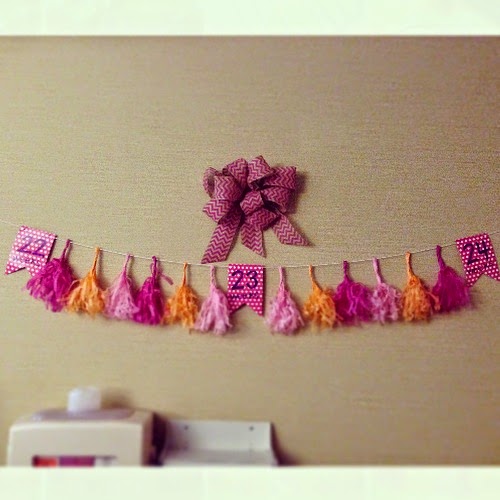 Another week has come and gone and it's all being overseen by the Lord. Every day it's increasingly obvious how He is right here with our little family. I thank Him daily for so many miracles, so many blessings, and so much love!

"For I know the plans I have for you,” declares the Lord, “plans to prosper you and not to harm you, plans to give you hope and a future.
Jeremiah 29:11

Hi Linley, good to know the girls and you are doing Great!!

God will make a way where there seems to be no way .He works in ways we cannot see he will make a way for you! He gives life so trust in him and stay blessed all will be well :)

I check your blog often please keep us posted.

Hi to everybody, here everyone is sharing such knowledge, so it’s fastidious to see this site, and I used to visit this blog daily