TIME: A Cruel and Beautiful Gift

In the past three years, time has revealed it's multi-layered face within my life.

Two years of trying to conceive felt like a lifetime; seven weeks of hospital bed rest blurred the lines between days and weeks; four months in a NICU felt like an eternity. Then, all of a sudden, I had a one year old; on top of that, I'm almost 25 weeks along in a pregnancy that I've just wrapped my head around.

How does time take forever and slip by simultaneously?

Tonight I sat on the bathroom floor, beside the tub; Sadie Ann was in her inflatable, yellow rubber-ducky tub. She smiled, carried on serious conversations with her toys, splashed, giggled, and listened to me when I had to tell her No (a couple times - she likes to try and climb out). I watched her hold and study her toys. I watched her make decisions and come up with independent thoughts. 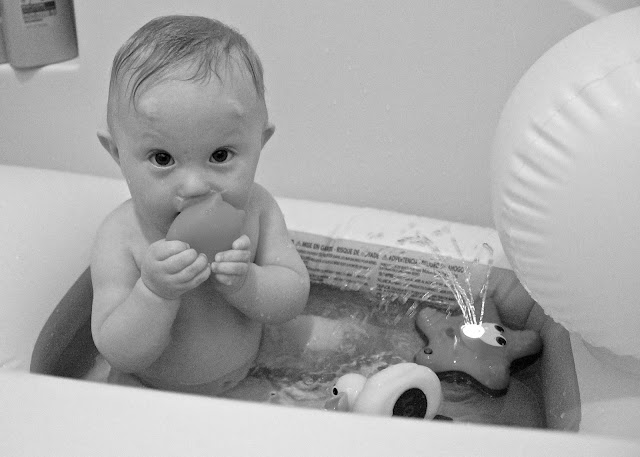 It's been a few weeks coming. I've slowly been realizing the tiny baby that needed me for every nook and cranny of her life is growing up. She, of course, still needs me most of the time, but she can hold her bottle, she can sit on the floor and play by herself, she can move around and get the toy she wants, and she can entertain herself.

I'm no longer her sun.

Her world is getting bigger and my role is getting smaller. Only slightly smaller, but smaller none the less. Still, every aspect of her life is completely dependent on me - and will for many years to come; however, in each of those aspects she is gaining independence. An independence in which I am completely grateful - her prognosis at birth was quite terrifying and becoming an independent child wasn't guaranteed. So I'm overwhelmed with the progress and growth I see in her daily, but it's also a constant reminder that my little five-pound baby that we brought home at four months old, on April 10th, isn't that same tiny, needy baby. A hard and harsh reality to face.

Life doesn't wait for you to catch up - I find myself wanting to revisit the days she took a bottle every three hours. The nights when she was up two or three times. That sweet little face that has already changed so much. It all moves too quickly and I'm scared I'll be going to dance recitals and ball games, then taking her to the DMV and prom dress shopping next time I look up.

I was always warned of the beast of time. My mom and my grandmother have said multiple times, the older you get, the faster time flies! Yeah, I've noticed. But it's not until your baby girl is no longer a baby girl that it brings you to your knees.

My point is - tonight was a punch in the gut. It was a reminder that time doesn't stand still, there's no rewind button, and babies don't keep. And that's the cruel part. Contrastingly, we are given the gift of joy through watching them grow. Physically, mentally, and emotionally. We want them to develop their own independence. We want to see them move forward and create a successful and full life. Here I am realizing the juxtaposition of these emotions will be a never-ending tug-of-war game for the rest of my life.