Finding Out the Baby's Sex 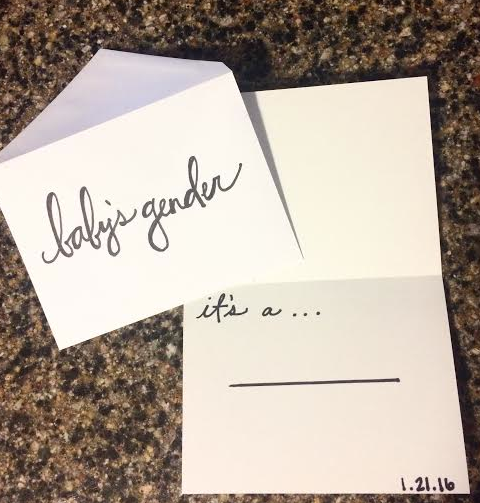 During my first pregnancy, shortly after finding out we were having twins, Chris voiced that he did not want to find out the sex of the twins. Well, he quickly lost that battle. There was no way I could go an entire pregnancy with TWINS and not know what they were. There were too many possible combinations and with a nursery and registry that needed to be completed, I had to know!

So when this second pregnancy rolled around Chris, again, voiced that he didn't want to know the sex. I knew this was coming, but since it was a singleton and we already have some of the basic baby things, I decided I could wait.

As the weeks have passed by, I've warmed up more and more to the idea of not finding out the sex. It's fun to know during the pregnancy (you know, so we can snag cute baby clothes and pick out a name), but to find out in the moment of delivery sounds so thrilling and wonderful. We're in our 30's and there aren't many surprises left in this life. This is not only the ultimate gift, but the ultimate surprise. Just imagining that as the baby cries for the first time, which is such a glorious moment in and of itself, but to also hear the words It's a ___ just adds a whole new depth to the joy of that moment.

I'm one day away from 23 weeks - a tremendous milestone in this pregnancy and yesterday I had my last cervical length ultrasound. The night prior I was telling Chris that it would probably be the last ultrasound for a while - which makes me really sad. Having a complicated pregnancy is never desired, but if there is a benefit, it's that you get to see your baby A LOT! I've been spoiled when it comes to ultrasounds. When I was pregnant the first time I had weekly ultrasounds up to 12 weeks just because I was going to an infertility doctor. Then when I went on bed rest I had ultrasounds every other day. This pregnancy, because of the cervical length checks, I've had ultrasounds every other week. So the idea of going three, four, five weeks or more without seeing the baby is just weird.

So in our conversation that night, after talking about it being the last ultrasound for a while, I got an I'm about to say something unexpected look across the room from Chris. Then, out of nowhere he says…

I think I want to know what the baby is.

The anticipation is getting to him and he's not sure how much longer he can wait. Which I should have seen coming since the boy can't keep secrets. I mean if he buys me a Christmas gift before Christmas, he's going to give it to me the day he buys it. He can't handle the anticipation! He still wants to wait, but it's just getting harder!

Although, I've completely given into NOT knowing (*cough* Chris's idea) and I've romanticized the delivery and the announcement of the baby's gender immediately after birth, I love how excited he is! This has obviously been on his mind and he's now starting to give in. Either way, whether we find out before or after the birth, it's the most exciting thing ever. It will be thrilling no matter when we find out!

So at my appointment yesterday I took an envelope and a card that I made above. My ultrasonographer took pictures of the baby's gender, put it in our card, and sealed it up! If it becomes too much for Chris to handle, we will open the card - if he can pull it together and wait it out, we will wait!

In the meantime, I still have no clue or feeling as to what this baby is. The hardest part about not knowing is trying not to refer to the baby as "it". I try to say "the baby" most times. In my mind I generally refer to the baby as he, but I've also referred to the baby as she. I've only had one dream about the gender and it was a boy. However, when I was pregnant with the girls, I would dream about twin boys or boy/girls twins, but never twin girls. So it's all very confusing. All I know for sure about this baby is that he/she is growing strong and perfectly and is staying put!

Oh my gosh! That's so exciting, I can't wait to hear what it is! I have never been able to wait!

Many prayers sweet momma. As a momma to an angel baby myself I know how hard a subsequent pregnancy can be.... Your daughter is a beautiful blessing and can't wait to hear more about your rainbow baby!