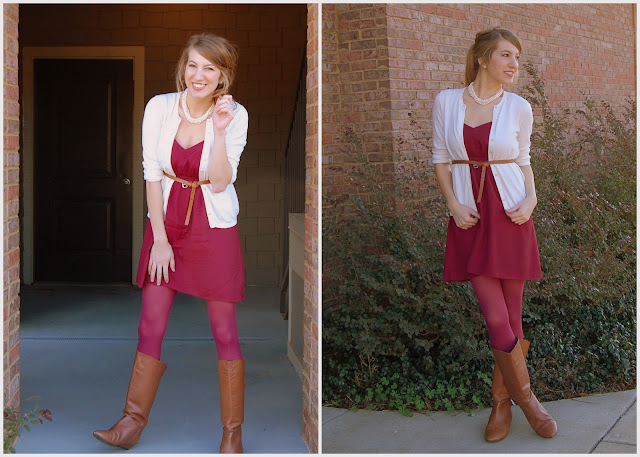 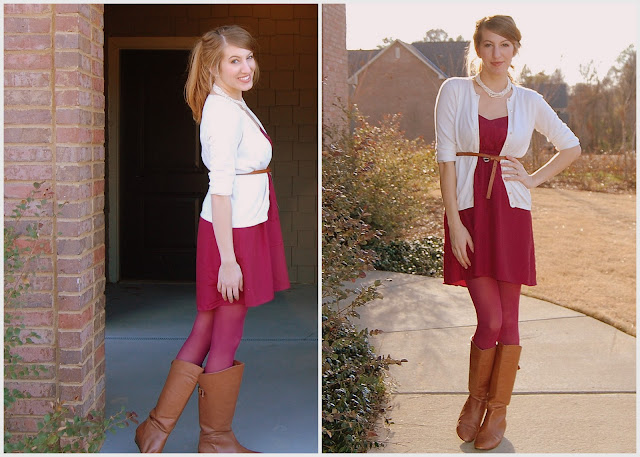 {Belk Winter White Cardigan (similar), Urban Outfitters Dress (similar), Steve Madden Inka Cognac Boots}
This is going up pretty late - my bad. I had a somewhat eventful day and didn't get to snap these photos as early as usual. Ah, c'est la vie! It was hard for me to pick a look today - this weather is really challenging me with my winter pieces. I definitely did not plan for the 70s; however, I feel like a snob talking badly about this gorgeous weather - so I'll stop.
In other news, there's been some drama going down in our little community. Last weekend, two little girls (middle school age), also known as the local pyros, set half of a near-by field on fire. We were pulling up to our place and we saw a huge (huge!) cloud of black smoke. I was scared to death - it appeared to be exactly where our unit is and panic set in. My baby girl was in the apartment (our dog, not a child)! Luckily, the flames were coming from a patch of grass behind our unit. We'd seen these little girls setting things on fire before. Right in front of our place... when we went out to talk to them, they took off. So we weren't surprised to to find out those two were behind these events.
Tonight, as I was watching tv, I heard the faint sound of an alarm clock going off. A horribly miserable sound. So I muted the TV and realized the fire alarm in the building across the street was going off. Soon after, two fire trucks, an ambulance, and the fire chief were surrounding the building... Now I didn't stay outside and gawk long enough to figure out what the deal was (I was too tired and full from Moe's), but I wouldn't be surprised if it ended up being those two little girls.
Kids....

Email ThisBlogThis!Share to TwitterShare to FacebookShare to Pinterest
Labels: 30for30, 30for30winter, daily threads

i love the red and white for your outfit and the necklace is such a classic addition. and how scary about the fires! it's a good thing your house was ok, but wow, i'd be a little paranoid... at least you guys were ok!

cute and little
come check out the color brigade!

great dress! and moe's mmmmm :) i go there way too much!

That sure is some drama! I hope they don't end up hurting anyone. Very cute outfit, love the color! :)

Oh, and I love Moe's so hard to not overstuff yourself!
visit heyrecklessmind.blogspot.com

Love the color of your outfit! Hope your drama gets taken care of.

how do you tie your belt? that sounds so lame, but i cant do it. i swear i am just the lamest of lame.

i totally agree with you on the weather thing! ice last week. 80 today. what am i supposed to do! AGH! but your look is adorable! like that dress a lot!

Hello! I've come across your blog a couple of times and now I'm a follower! This outfit is so cute!

I totally feel you on panicking for your baby dog! And on the Moes. And on kids. AND on the red. haha. Love all the red.

You look lovely and classy as always!

Wow, hope the parents of these little girls get this situation under control. I know they are kids but fire is SERIOUS.

scary! i hope everything is ok. if it makes up for it, your outfit is super cute!

oh and if you get the chance to swing by my blog in the next couple of days, i'm holding my first giveaway. would love some feedback as well!
http://holly-closetomyheart.blogspot.com/

I never would have thought to wear the same color tights as my dress.

Doesn't it trip you out when you realize you're now the old lady shaking your heads at "the kids." I don't know when I got this old!

What a perfectly red hot look for a fire filled post. You look great!
No Guilt Fashion

Oh my gosh that terrible about those girls! In other news though, I love the bright dress, bright tights combo!

Oh my! Those Pyro-girls are scary, not cool at all! ... Love your pink legs, bright outfit is cute!

I love this colour on you!! So bright and perfect for a nice warm day :)
Oh my god, those kids sound so stupid, they should be charged for something. Some people are so dumb
xJennaD

okay those kids are crazy.. for real.
love the outfit, and pic #4 is super super cute, good lighting. B- Matters of Merrymaking

That's crazy about the fire!
I thought your title was going to have to do with your firey outfit, which I love!!


Be Sure To Enter My Exposed Envy Giveaway!

First off, your outfit is HOT. Absolutely love the dress with the colored tights. You definitely make me realize how well belted cardigans can work with dresses (another thing on my list of things to try during this remix)!

Secondly, what the heck are these kids doing with lighters?! Sounds like craziness if they set half a field on fire!

I love love LOVE those boots.

I love that color on you! What a pretty dress.

Hope, everithing will be settled asap!

Great outfit! I have a passion for cardigans:)

I LOVE your use of color!!!
www.cathykhayes.blogspot.com

I love and am currently wearing those boots.

Love the necklace too, where from?

Great outfit! Crazy kids, hope that no one got hurt because of their silly behavior x

Love the wine coloer of this dress! It looks amazing.

I'm so glad it wasn't your unit, or anyone's for that matter. I hope they caught whoever was doing starting the fires.

I love how the title for your post works with your outfit even without all the pyro tales! That dress is so pretty and as always you look amazing :)

two incidents and where are there parents?! Geez that's scary! Glad ya'll are safe!

That dress is hot! No pun intended. Stupid kids. Hopefully they quit before someone or something gets damaged!

oh no! that is some scary stuff. glad to hear you're ok.

Yikes! That sounds awful, I'm glad you're alright!
I love the pink on pink!
Love, L.

Sorry about the fire. That is a little scary. I do love this outfit though. The pink on pink is so pretty.

Great outfit. I love that you are not affaid of color. You wear it well. I wish I could be more like that but I'n not there yet.

Just a thought that someone might want to check out the home life of those 2 girls. There has to be a reason they are setting fires. Maybe a cry out for attention?

That's crazy about the fires! I'm glad you guys and Maeby are okay.

I also love this outfit, the dress looks great with the matching tights.

oh my gosh, that is crazy! where are these kids parents?! scary :( hope everything was okay at your neighbors!

Scary! I agree with Archives.. where are the parents? If my boys ever did stuff like that they'd be off to boarding school (or somethin like that) in a hurry.

Anyway - love the monochromatic look you've created with the tights.

Love how this outfit manages to fit with your fire them somehow :)

I'm glad nothing happened to you guys and I hope everybody in your community can feel safe again soon...

Yikes! That's scary! In CA fires are no laughing matter - you could take out a whole city. :(

I love your outfit though - nice & fiery.

OMG... aren't there like, police to reprimand these kids? In Japan, if you start a fire, your neighbors will like, force you to leave the apartment complex.

What a great outfit! I never thought pairing similar color dress with tights would go, but your outfit totally works! White cardigan, white necklace, beautiful. I see the 3 color rule here too!

My favorite part about the dress - the slight V-neckline. Beautifulll outfit as always!

PS. Before, I thought you were super bling bling and lived in a mansion or something cuz I always see such tall buildings in the background and a wide lawn! Anyway... haha.

love the color and paired with cognac and white it's just perfect :)

Love this outfit! Matching my tights to my skirt is my new favorite thing, it works so well!

Chic on the Cheap

The coloring in this outfit is gorgeous! And wow those little girls seriously need to have more attentive parents!

i looove the combo of pink and brown together!! the belt over cardigan look is soo in right now! love it!!!