Kendi tagged me to share seven things about myself during my school years. Although I've already shared seven, four, and an entire About Me page, I'm not going to say no (plus, she threatened with or else). I'm not one to let {another} chance at dishing random facts slip out of my hands. 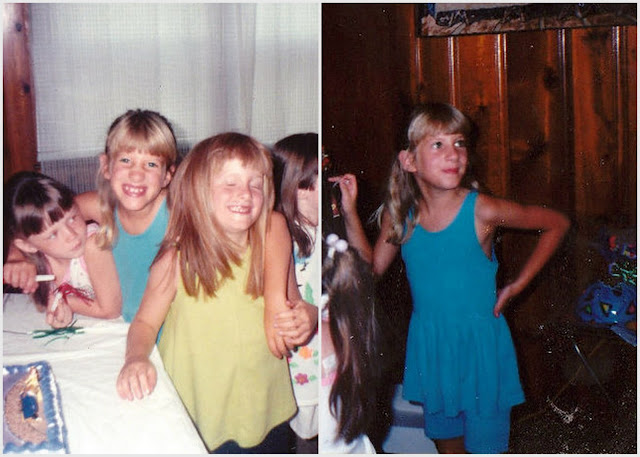 1. My first concert: New Kids on the Block. I wish I was at home so I could scan the pictures of me at the concert. I was rightfully equipped with a black and neon hat (tilted to the side, of course), an over-sized button the size of my head, and an extra large NKOTB t-shirt that also doubled as a maxi-dress at the time. So hip.

2. Poly Pocket was my go-to toy. I loved PP. I had around eight of them and at least one was with me at all times. Moon shoes were also a favorite.

3. My first CD - Meatloaf. I was so young, I don't even know why I wanted to buy it (or how I was allowed!), but I did. I just couldn't get enough of I Would Do Anything for Love. Other first CDs included Bryan Adams (So Far, So Good) , Ace of Base (Sign), and Mariah Carey (Music Box).

4. Speaking of Mariah Carey, I had quite the obsession with her music growing up. I had all of her CDs and to this day I can sing any song - word for word - and all the "oh Oh oH ohh's" that go along with each song. I even sang Dreamlover for a 5th grade talent competition. 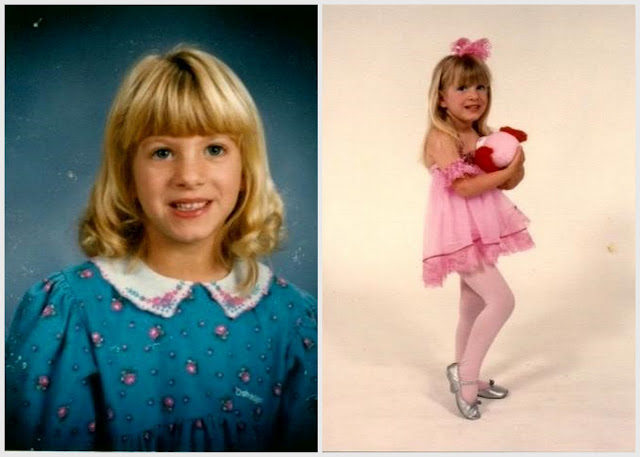 5. I took dancing from age two up through my early teens. My favorite part of dancing: recital consumes. I loved playing dress-up and my costumes were always what I'd go to first. I sometimes would even put the costumes on our dog - and I'm telling you, a boxer in a leotard with a tutu is the cutest thing ever.

6. Before my CD player was the record player. The only record I remember having and playing is a Rainbow Bright soundtrack.

7. I learned the things that a curling iron can do to Barbie's hair the hard way.

Now, Ashley, Kristen, Rochelle, Sarah, Kimmie, Kileen, and Law Mama Liz let's hear about your childhood. Also, if you're in my blogroll (and even if you're not), I tag you too!

How adorable were you Linley? Oh my! The Meatloaf CD cracked me up! Too funny.

You look so adorable in these photos! I love when bloggers share pieces of their chidhood!
xo Lynzy
http://sparklingfootsteps.blogspot.com

new kids on the block was my first concert too! hahaha i am sure i was among those with neon and buttons overload...

omg, you're so cute as a little kid!! and fashionable too! ;)

i was a huge fan of NKOTD as a kid and remember begging my parents to let me go to their concert. unfortunately no amount of begging worked. you were so lucky!

and thank you so much for tagging me. i'm off to find some old pictures now! :)

How cute is that picture of you dressed up holding a stuffed animal?! I also was a fan of Mariah Carey growing up. To this day I think my favorite song is "Someday".
missy-marshmallow.blogspot.com

So fun! Love that NKOTB was your first concert!

I think that we are lite rock soulmates!! Huey Lewis and the News was one of my first tapes - along with Bruce Springsteen "Dancing in the Dark".

And I hope, I hope that you are going to find your way to the NKTOB/BSB concert tour that is happening this year!! :) :)

You were so cute! I love your seven things... and since you tagged me I guess I should share 7 more things too... :)

Whoa. Everything you said brought back some major memories. Especially the part about your NKOTB button. Did you also have the trading cards? I think I had every one ever made...in addition to all my other New Kids paraphernalia, like t shirts, pillowcases, buttons, and dolls. ;)

Love your little kiddie pics! Thanks for tagging me...I'll get right on this.

I love all of the music references, I think our childhood sleves would have gotten along just fine. AND made for an awesome duet of "Always be my baby" lol

i had a record player, too! i loved it. i think i also had the rainbow bright soundtrack :)

Oh my gosh, those are hilarious. Thanks for tagging me! I'm going to have to go scan a bunch of awkward photos... I have an overabundance of those! :)

You were such a cute kid, I love these. I was sooo into polly pocket too, it was so awesome. Y
xJennaD

We still have Polly Pockets in our toybox for the grand-daughters. And hubs likes to sing along to Meatloaf!

I'm the same way with "Music Box" I used to dance to it in my bedroom, so glad there weren't any video cameras about.

I can so relate to the Mariah obsession! I memorized those Ohs too!