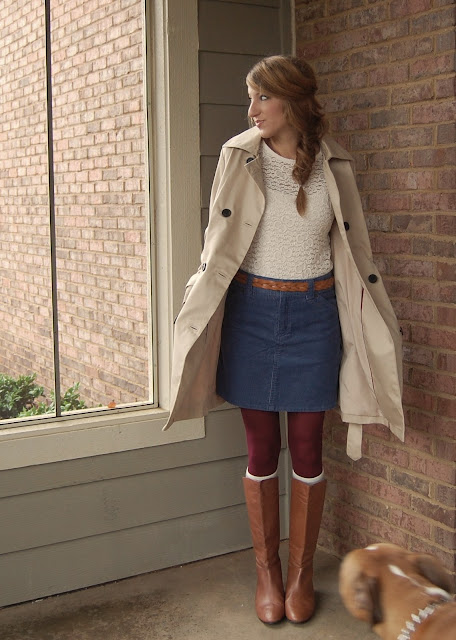 It hasn't rained much since we moved to AL, but when it does rain here, it makes up for lost time. And I like rainy and gloomy days. As long as I can stay inside and enjoy from a distance. I also try to avoid pants on rainy days. It always seems to be the case that if I wear pants when it's raining, they will get soaked, but that's not enough. The water migrates up the pants (don't you hate that!). Which isn't comfortable for me or anyone having to look at me. So I stick with boots and a something short. And that's how number eight was born. I was also pretty excited to wear this trench for the first time.
Maeby insisted on being part of the photoshoot today. Some pictures she was being a bit too provocative (you know, showing off her hiney and everything) and blocking the lower half of my outfit, so she eventually had to be put back into the house, but not before snapping a mother/fur-baby shot.
Trench: Target
Lace top: Target
Corduroy skirt: Gap
Belt: {don't remember - Target?}
Tights: mom's {probably from when she was my age}
Socks: NY&Co.
Shoes: Steve Madden 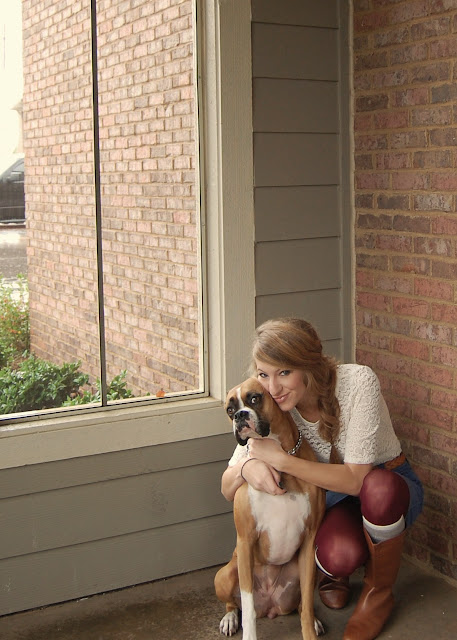 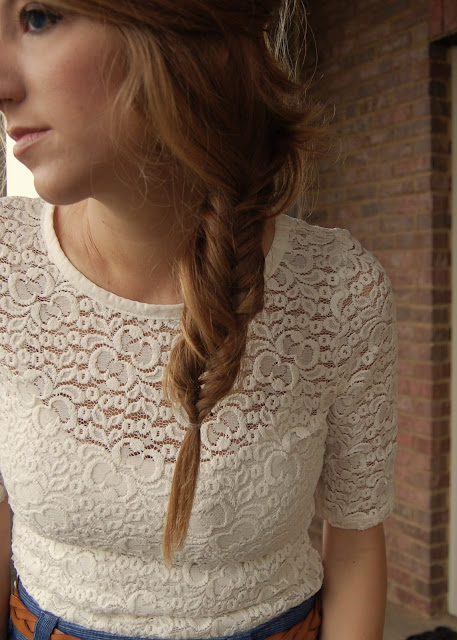 I wanted to snap the above picture because this is by far one of my favorite hairstyles. It's different than your usual braid, it's soft and feminine, and it's so easy to throw together in the morning. The only thing... since I've had layers put in my hair, I get those annoying fly-aways - which gives character, but I would rather it look like this. 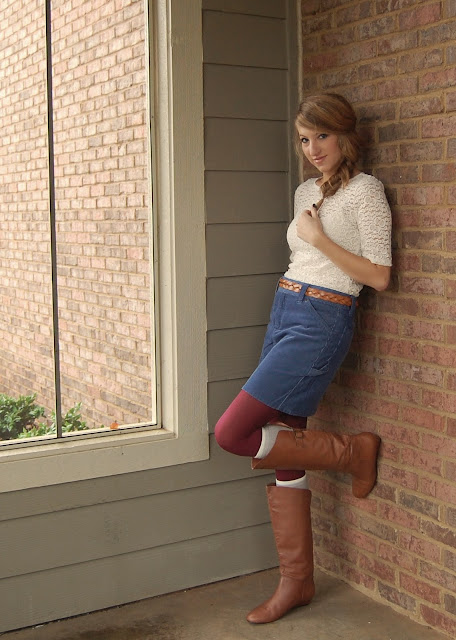 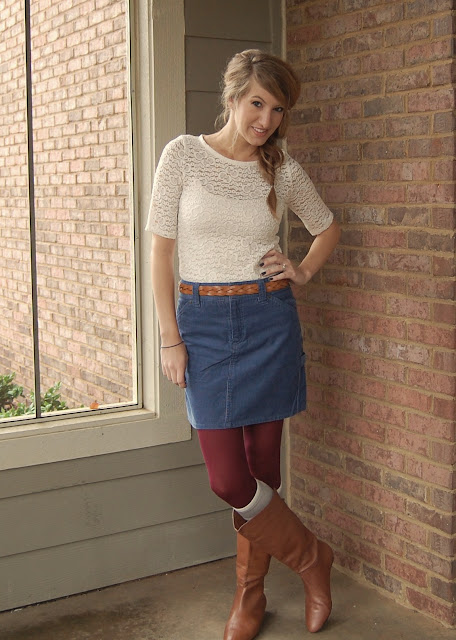 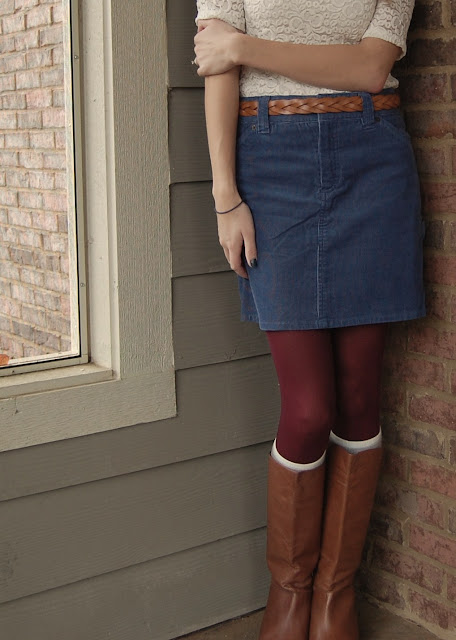 Email ThisBlogThis!Share to TwitterShare to FacebookShare to Pinterest
Labels: 30for30, daily threads, outfits

love the fish tail braid :) I can't wait til my hair grows and I can do it again :)

Love everything but especially the tights and braid! So cute!

I love this outfit! It's perfect Classic with a twist! The top is stunning..I love the lace!...I think I could go on and on about all the details I love in this outfit...

Ohhh, I love your shirt & trench THIIIIIIIS much!

& you're right, I never thought about how wearing jeans or pants on a rainy day isn't such a good idea. It's so obvious, but completely missed. From now on, I'm doing what you do.

PS, I've added you to my blogroll on my site because between your yummy recipes & stylish outfits, I needed you front & center!

I just googled how to do a fishtail braid after reading this because I definitely want to try it once my hair grows out a little more. Love the tights too.

That's a great trench! I can never do that style of braid on myself. I can do it for other people, but not for me!

This outfit is classic with lots of pretty details. I love the braided belt and your braided hair, and I especially like the lacy top. The mauve tights are a fun touch. Maeby is super cute. :)

I for some reason cannot do fishtail braids! I follow all the directions yet end up with some weird gaping hole in between... so weird.

Everything about this outfit is so super cute! Love the top and skirt and boots with socks! And on top of that, your hair is awesome too!

Now I feel bad about not fixing my hair lately...I'm lazy.

LOVE it. especially your hair, top, trench, and boots.

I love the braid & the sweet little puppy! I enjoy the rainy weather too....it's a great time to curl up inside! Oh & the tights are so fabulous!!

I love that lace top. It's so classy!
Wearing It On My Sleeves

On rainy days (which are not many here) I don't wear pants either unless they're cropped cuz I hate wet hems. You look great and the tights go so well with the rest of the outfit! =)

beautiful outfit! i love the lacy top and the way you paired it with a denim skirt. my denim skirt doesn't get enough love these days! and those white knee-high socks over the maroon tights are so awesome! i'll have to try that sometime too. :)

I love this outfit! The lace top is gorgeous and I love the trench. Your fishtail braid is so pretty! I always try to do the braid but it doesn't work on my slippery Asian hair =[

Lady. I am obsessed (OBSESSED) with this outfit. The colors, the textures ... suddenly feeling super-sad that I don't have a lacy top in my 30. Actually, this exact lace top.

Very pretty & romantic. I really love those boots with the socks.

I adore this outfit. That top is amazing.

I too stick to skirts on rainy days. I HATE the wet pants thing, especially with jeans. It's so uncomfortable.

I need to try the fishtail braid, I've been a little intimidated by it, but I watched a youtube tutorial on it and feel a little more confident. I think my curls and layers are going to make it interesting though.

I love rainy days! Your hair is so great!

Hi! I just found your blog and I LOVE your style! and Your hair looks amazing in these photos!

gorgeous! I especially love the top. Cute dog, mine likes to pose, too!

Lovin' the look. You are gorgeous.. and I'm totally diggin' your hair as well. Fishtails rock!! Happy Tuesday.

Very cute fall look! I like the way you styled the socks with the tights.

eight is great indeed! you look so pretty with your top! and look a special guest. seems like the canine chums are showing up on the 8th day.

love your braids as well! i wish i knew how :D

cute outfit. i love those colored tights and your precious dog, maeby.

I cannot get enough of your adorable outfits! Those boots with the tights and knee socks? LOVE! I have been wanting to try out my knee socks with my tights and I think I may brave it this weekend :) You are simply gorgeous! I'm your newest follower!

Love your outfit. Such a cute dog :)