What I Do: Part I

Since I've recently started a new job and I often get comments and emails asking what I do for a living, I thought I would do a two-part write up about speech therapy and exactly what I do. Part I will be more about speech therapy in general and a brief summary of my grad school experience and Part II will be more about what exactly I do in my specific job.
It would be extremely difficult to put everything there is to know about a speech-language pathologist (SLP) into a blog post; however, I am going to try to sum what we do up into a few paragraphs.  A lot of people think "you help kids with /r/ and kids who stutter" - and yes, that's true, but there's more. A lot more.
A basic definition: a SLP is someone who evaluates, diagnoses, and treats speech, language, cognitive, and swallowing disorders. We work with newborns, toddlers, elementary age, high school age, young adults, adults, and the elderly on a variety of different types of disorders and/or delays - articulation, phonology, fluency, cognition, language, voice, swallowing, and literacy. We work in daycares, pre-schools, school systems, rehab centers, nursing homes, hospitals, private practices, traveling, and some even participate in telepractice. Our clients could have autism, down's syndrome, MS, cochlear implants, accents, a stroke, aphasia, dysphagia, dysarthria, and several other disorders/conditions.
Moving on - grad school was two years (five semesters) of balancing classwork and clinicals. Not all graduate programs for speech are set up the same way. I know some programs have the students take the classes first and then do all their clinicals, but I love the way ours was set up. We had classes on Tuesdays and Thursdays and clinicals on Monday, Wednesday, and Fridays - we were learning the classwork as we were performing the therapy. During our last semester, in addition to classes and clinicals, we also had our master's project - and the majority of us also took the praxis. So definitely a stressful time, but rewarding to complete everything!
My first two semesters my clinicals were in pre-schools. I traveled to different pre-schools and mostly performed articulation and language therapy - although, I did have to do a couple evaluations. My third semester (over the summer) was in a hospital. The hospital had a rehab center beside the facility, so I was also able to get a few hours there - which was nice for the experience. In the hospital the majority of the patients seen is for dysphagia - which is the medical term for a swallowing disorder. More about this in Part II! My fourth semester was at a K-5 elementary school which also had a More at Four program, so I was able to get lots of screening and evaluation experience with pre-schoolers. In the elementary school my caseload was mostly articulation therapy, but I definitely had some language and literacy in the mix. My final placement was in an after-school literacy program that a group of us (plus our supervisor) put together. We basically spent the first couple of weeks testing and determining a baseline for the children - so we could put them in groups determined by skill level. Then we spent several weeks coming after school for about an hour and a half following an evidence-based literacy program - teaching them about letters, sounds, combining the two, and new vocabulary words. At the end of the semester we re-evaluated them and they all showed improvement. It was fabulous - definitely a favorite clinical of mine!
In addition to classes and clinicals, I was also an officer for our local chapter of NSSLHA - which is our national organization for speech-language and hearing. My specific title was Historian/Creative Director, but we were all so close and worked so well together that with most events we all pitched in, shared roles, and just worked to get the job done. To name a few, we participated in Operation Christmas Child, local food drives, local festivals, and we put together an inaugural 5K run/walk for Full Spectrum Farms - a fabulous organization our program worked closely with. Here we are! Such a fabulous group - love them! 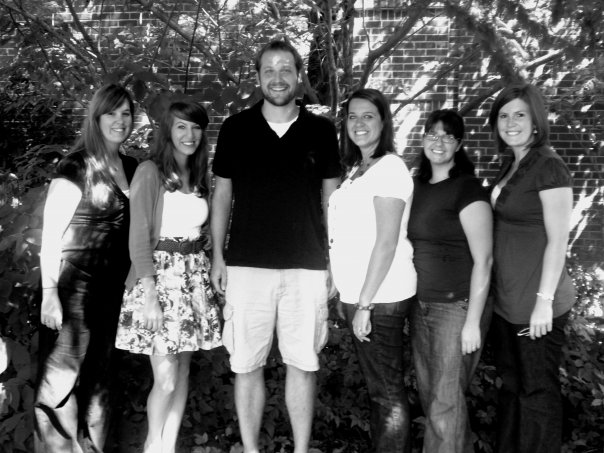 So this is a very quick and dry explanation of my grad school experience - there's so much more to share, but I could end up writing for days. If you want to know more about something specifically, or have a question about anything - ask in the comments - or email! After I complete Part II, I'll write up a Q&A for any questions you all might have. So ask away!

Thanks for sharing! It's cool to read about what you (and other bloggers) do for a day job, and your experiences sound really interesting.

I am a huge fan of knowing what bloggers do by day and then at night : )

looove that you do so much to help others :)

So exciting to hear that you're an SLP! I'm an OT and can't wait to hear more about your day-to-day! Go Team Therapy!

This sounds SO interesting! There are so many professions out there that most of us don't get to hear about on a daily basis. I can't wait for part II :)

aww, hello fellow slp. i work with preschoolers with special needs. grad school was hell. i am so glad that is over. learned a lot and made great friends though:)

Wow, sounds like you have such an interesting career! It's great to have that sense of satisfaction from making a difference in someone's life. Thanks for sharing!

Very well done, I think its important for lay-people to know that every women that works in healthcare is not a nurse. I'm an RT and that was a great public service post. Congratulations on earning your degree. It really is rewarding helping people live better lives.

Wow sounds like a really interesting job! It's so nice reading about what other bloggers do :) Thanks for sharing xo

Funny, my sister is working on her master's degree right now to do the very same thing.

One of my good friend's mom was a Speach Pathologist in an elementary school. It always sounded like such an interesting job!

I watched a swallow study with a SLP while doing my RD internship. Very fascinating work. Nutrition and SLP go hand in hand! You guys are awesome!

I'm just about to start grad school this fall to be an SLP, and I'm very excited about it!

This was really interesting to read. Thanks for sharing! I always kind of wonder what all the fashion bloggers I follow do for a living....

Fascinating! What an interesting line of work. Can't wait to read part 2!

How cool! My mom had a stroke a couple years ago, and still sees her speech therapist for aphasia and apraxia. SLP's are amazing and help people so much! Good luck with your career.

Ah I always wondered what you did, but never asked. It's interesting to read about what you studied. :)